Lurid Conditions Are Facts. This Is No Different from Daily Protests and Cashbars

I remember we were in hotel just north of Richmond. We were driving home from visiting my in-laws in Florida in August 1998, it was late, storming, we were hungry. After dinner Bill Clinton came on the TV and angrily said, yeah, I did, fuck you. I was furious, as Clinton was furious, not about Clinton's marriage vows being broken but at being so sloppily caught breaking them, though at the time I was convinced I was genuinely morally outraged, but then a midterm election followed in three months and my amoral team spirit was restored.

Which Republican currently running, if elected POTUS, would make your head explode most? That's why Gingrich won South Carolina with the Christian conservative vote. 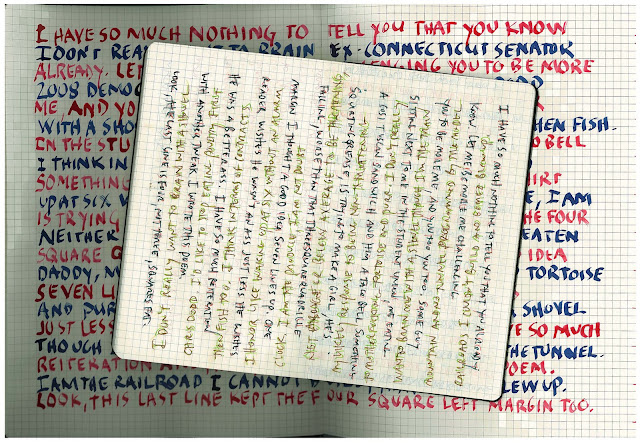 It was Jessica Grim the American poet
who first advised me to read Violette Leduc.
Lurid conditions are facts. This is no different
from daily protests and cashbars.
I now unknowingly speed towards
which of all acts, words, conditions—
I am troubled that I do not know.
When I feel depressed in broad daylight
depressed by the disappearance of names, the pollen
smearing the windowsill, I picture
the bending pages of La Bâtarde
and I think of wind. The outspread world is
comparable to a large theatre
or to rending paper, and the noise it makes when it flaps
is riotous. Clothes swish through the air, rubbing
my ears. Promptly I am quenched. I’m talking
about a cheap paperback which fans and
slips to the floor with a shush. Skirt stretched
taut between new knees, head turned back, I
hold down a branch,