Watch Jaime's departure, see a photo gallery. See another photo gallery. He got his goal. United lost. Moreno's going home to his native Bolivia to decide whether to play another year there or accept a job with United. Hopefully United will hold the job for a year if Moreno decides to play one more year. 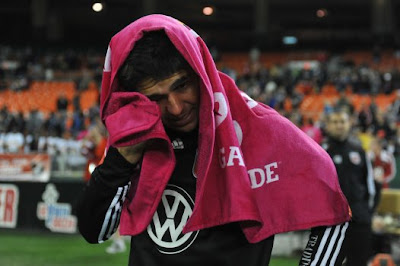 United just sucks. In two months or so, United will need produce a list of protected players for when expansion teams in Vancouver and Portland draft current MLS players. Here's last night's roster:

Yesterday was one of the oddest days in my recent past, attending one literal funeral in the morning (for a friend of my parents) and one figurative funeral last night. I'm probably not going to write about the former. Other than to say it was heartwarming to hear LOUD SIDE! boo Kevin Payne, this is all I'm going to write about the latter for the time being .

UPDATE! Even terser than my post.
Posted by BDR at 9:07 AM