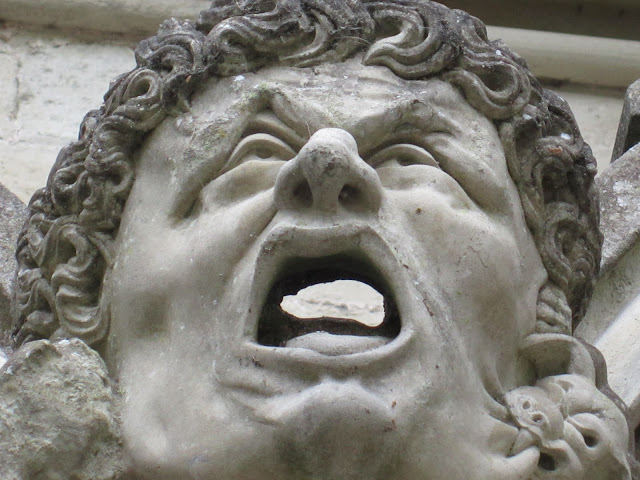 I never enjoy a vacation fully until it's long over. I always enjoy everything more in the remembering than doing. I am a melancholic. It's 8:30 Saturday evening in London as I type this; by 8:30 tonight DC time, if the planes are not delayed, I will be at home or in the taxi home or still stuck at Dulles going through customs. I'll begin the internal decolorizing and archiving of my vacation within a month.

I straddled, as a child, the toggle from all black and white TV to color TV. The pangs I feel, that rush me when a see a show in black and white, overwhelm me at times. Gavin the Borscht Terrier (who for all my teasing was a decent guy who did us a major favor when we needed one) was telling the story of the World War Two bombing of Coventry, how Churchill knew the bombers were coming but couldn't scramble air defenses for fear the Germans would learn the Brits had broken the German code. England feels black and white but insists on being in color. The war and postwar and empire's collapse in black and white feel more real, fuller, than the color I saw this trip. I feel like I felt when I first saw color television (The Flintstones) at an uncle's house when I was six and wanted the black and white back.

Bath, which we'd seen before but is, if I was to live in England, if I could get a job at university, a place I'd deeply consider, then a drive-by of Stonehenge, still packed with grown adults dressed as Druids for the solstice, then Somerset, which looked like Cambridge, York, Chester only dirtier, grubbier, meaner, now in London, just a couple of blocks from where we stayed two and a half years ago. I could not live in London; even if I could afford it it's too crowded and busy, even if I didn't mind the crowds and constant swirl I couldn't afford it.

When I think of London I think of Laurence Olivier narrating over black and white footage of the The Blitz. John Steed and Emma Peel changed fundamentally when their second season was in color, an entire world of mystery and imagination cheated me. I am a melancholic. I know it was in color that Frank Shultz drove us to the Monessen A&P in his light blue Ford Fairlane when I was six, but I remember the light blue Ford Fairlane, the yellow and red daisies lining the red brick driveway wall, the red and white A&P sign, in glorious black and white.

Email ThisBlogThis!Share to TwitterShare to FacebookShare to Pinterest
Labels: Autoblogography, My Complicity, Uktrip