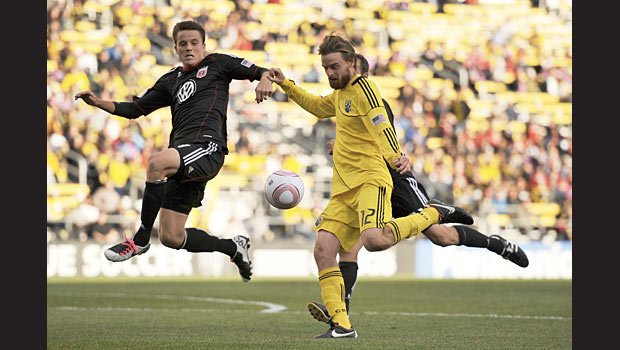 What to say? A team starting Daniel Woolard in central defense, Chris Korb at right back, Marc Burch at left back, Clyde Baal Bless Him for His Service Simms in holding mid, Santino Quaranta on midfield wing, and Joseph Ngwenya and Charlie Davies as strikers (with Josh Wolff as replacement), won't win many games. How many players who started for United yesterday make Gax's or Seattle's game-day roster? Two?


Since Chris Pontius' breakthrough game and broken leg v Chivas in early September United is 1-1-3, the one win coming against a Salt Lake that played two-thirds of its reserve team and which quit after DeRossario's spectacular hat trick in the first half hour. Of the starters from yesterday's game, only Hamid, Kitchen, Najar, and DeRossario might be starting if and when United seriously challenges for Supporters. Yes, starters were missing who might be here - Pontius on wing, McDonald, Jakovic, White in central defense - but it's important to remember - or at least remind myself - that this season has always been about next season. There was never going to be a leap from historically bad to historically good.

It's true that in MLS mediocrity is often rewarded and reaching the playoffs a serious goal because once in MLS' sillyass playoffs every team has a puncher's chance. Still, playoffs or no (and they might still make the playoffs, though four games in eleven days means a boatload of Woolard) - and it will be disappointing if United doesn't make the playoffs - and as frustrating as this team's fits and starts have been, United, when all starters are healthy (and it's possible that team would have beat or tied Chester this past Wednesday, probably beat an awful Columbus yesterday), is significantly better than last year's, hopefully significantly worse than next year's.
Posted by BDR at 8:00 AM