Knelt Before the Philco to Coax the Detonation from the Static

The highlight of trip to visit Planet in Bamgier was a four hour car ride we took Saturday afternoon. I drove on roads I've never driven, Planet got away from from a loved but isolated campus for a few hours, Earthgirl shot photos for potential paintings, we talked a lot. From Bamgier we took Ohio 229 east to US 36 east through Nellie and Warsaw for forty miles through the beautiful Walhonding River valley until it reaches Cochocton. Here's the Walhonding River watershed: 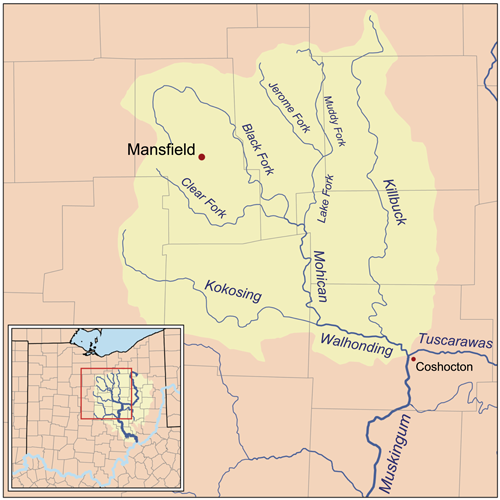 I'm still thinking about the drive, I actually wrote out the entire thing but will spare you and me the bother, but this: we oohed and aahed the physical beauty of rural east-central Ohio, but then we drove into Coschoton, we drove into Newark, me and Earthgirl stayed, ate and drove through Zanesville, and what percentage of those still living in these dilapidated and deteriorating and abandoned by Corporate's inexorable hunger cities sympathize with Occupy much less doesn't loathe Occupy?

And my apologies, after reflecting, I won't post the dinner stories as promised last post, too bad, there are two good angles, if you ask me in person I'll tell you them both. Meanwhile, from the soundtrack of the trip:


Outside the window the McGill smelter
sent a red dust down on the smoking yards of copper,
on the railroad tracks’ frayed ends disappeared
into the congestion of the afternoon. Ely lay dull
and scuffed: a miner’s boot toe worn away and dim,
while my mother knelt before the Philco to coax
the detonation from the static. From the Las Vegas
Tonapah Artillery and Gunnery Range the sound
of the atom bomb came biting like a swarm
of bees. We sat in the hot Nevada dark, delighted,
when the switch was tripped and the bomb hoisted
up its silky, hooded, glittering, uncoiling length;
it hissed and spit, it sizzled like a poker in a toddy.
The bomb was no mind and all body; it sent a fire
of static down the spine. In the dark it glowed like the coils
of an electric stove. It stripped every leaf from every
branch until a willow by a creek was a bouquet
of switches resinous, naked, flexible, and fine.
Bathed in the light of KDWN, Las Vegas,
my crouched mother looked radioactive, swampy,
glaucous, like something from the Planet Krypton.
In the suave, brilliant wattage of the bomb, we were
not poor. In the atom’s fizz and pop we heard possibility
uncorked. Taffeta wraps whispered on davenports.
A new planet bloomed above us; in its light
the stumps of cut pine gleamed like dinner plates.
The world was beginning all over again, fresh and hot;
we could have anything we wanted.