Please play that while reading the rest of this post, being careful to open each link in a new tab so you don't have to start the song over over and over. David Thomas' music has one of two permanent chairs in my sillyass Desert Island Five game.

At Thursday Night Pints, K especially, but D and L too, wanted to talk about blogging, macro/micro, general/particular, both why I do it and, more importantly, what do I hope to accomplish, I mean, why do I do it the way I do? so I told them.

Then we talked about Occupy. Like everyone else, none of us have anymore of a theory of hope than anyone else. Also, if you live in Metro DC and have blankets/old coats you don't need and want to donate to Occupy I'll come pick them up sometime Saturday afternoon and take them Downtown Sunday. You're welcome to join me. 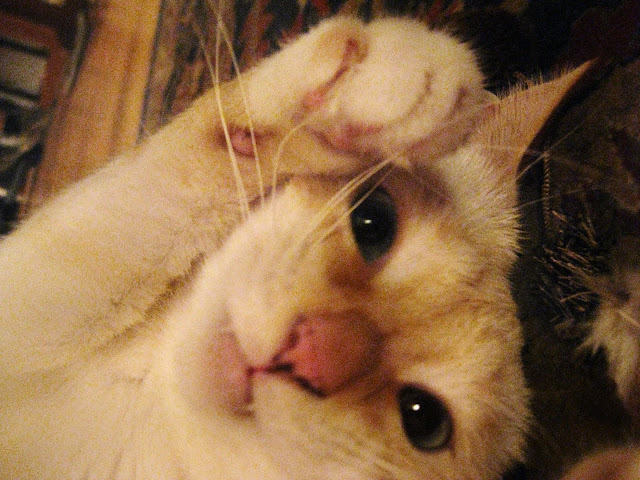 HOW THE POPE IS CHOSEN

Any poodle under ten inches high is a toy.
Almost always a toy is an imitation
of something grown-ups use.
Popes with unclipped hair are called corded popes.
If a Pope's hair is allowed to grow unchecked,
it becomes extremely long and twists
into long strands that look like ropes.
When it is shorter it is tightly curled.
Popes are very intelligent.
There are three different sizes.
The largest are called standard Popes.
The medium-sized ones are called miniature Popes.
I could go on like this, I could say:
"He is a squarely built Pope, neat,
well-proportioned, with an alert stance
and an expression of bright curiosity,"
but I won't. After a poodle dies
all the cardinals flock to the nearest 7-Eleven.
They drink Slurpies until one of them throws up
and then he's the new Pope.
He is then fully armed and rides through the wilderness alone,
day and night in all kinds of weather.
The new Pope chooses the name he will use as Pope,
like "Wild Bill" or "Buffalo Bill."
He wears red shoes with a cross embroidered on the front.
Most Popes are called "Babe" because
growing up to become a Pope is a lot of fun.
All the time their bodies are becoming bigger and stranger,
but sometimes things happen to make them unhappy.
They have to go to the bathroom by themselves,
and they spend almost all of their time sleeping.
Parents seem to be incapable of helping their little popes grow up.
Fathers tell them over and over again not to lean out of windows,
but the sky is full of them.
It looks as if they are just taking it easy,
but they are learning something else.
What, we don't know, because we are not like them.
We can't even dress like them.
We are like red bugs or mites compared to them.
We think we are having a good time cutting cartoons out of the paper,
but really we are eating crumbs out of their hands.
We are tiny germs that cannot be seen under microscopes.
When a Pope is ready to come into the world,
we try to sing a song, but the words do not fit the music too well.
Some of the full-bodied popes are a million times bigger than us.
They open their mouths at regular intervals.
They are continually grinding up pieces of the cross
and spitting them out. Black flies cling to their lips.
Once they are elected they are given a bowl of cream
and a puppy clip. Eyebrows are a protection
when the Pope must plunge through dense underbrush

in search of a sheep.