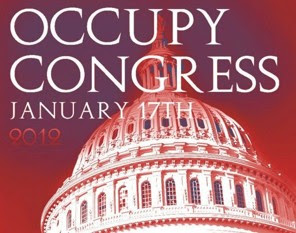 More. See you there.

UPDATE! I've been asked by a blogbud and asked by a total stranger to not hump Occupy Congress. Yes, I understand the objections. As with everything Occupy, I'm capable of seeing all points of view while being unable to articulate mine. My lame solution to this particular problem is to reduce but not eliminate Occupy Congress' logo. As always, fine ham abounds.

Also, here's a friend's report from yesterday's Occupy K Street - he can be seen in one of the vids, see if you can see him!

A guy shared his umbrella with me at the bus stop after seeing the Occupy DC pin on my backpack, the same kind he wore on his jacket.  Were you just blocking K Street? he asked.  Yeah, I said.  Were you?  Yeah, he said.  We waited in the rain for another half hour, the S2 nowhere in sight.  This is totally our own fault, isn't it? he said.  We shot ourselves in the foot, I said.

The bus finally came.  During the ride my new comrade told me he was a grad student at the university where I work.  We talked about the student body's lack of engagement with the Occupy movement, which, for such an elite-ass institution, didn't surprise either of us.  More upsetting, he told me, was what he perceived to be the McPherson occupiers' and their allies' uncritical celebration of any action approved by the DC GA, regardless of the resulting collateral damage.  What do you think? he asked me.  I said I think it's important to reclaim public space, visibly express anger, mess with cops, disrupt certain kinds of business and events.  But it can get dicey, I said, when those actions start to fuck with ordinary people's commutes.  You don't want to piss off the people you ostensibly support, he said.  Right, I said.

Such an obvious point, but it was enough for him to tell me, God, I wish more people who were engaged with Occupy were as critical of it as you.  I shrugged and thought, Really?  Because assholes like us only participate when it's convenient.  Then nothing would get done.  Anyway, I've witnessed enough discord amongst the protesters to suggest that there's at least some self-reflection going on.

We talked shit until his stop came.  All around us were working folks, mostly people of color, drenched and shivering, wishing that the two garrulous fucks in the aisle would shut the hell up already.  My bike helmet, strapped to my backpack, kept hitting seated riders in the face every time I maneuvered for more space.  Sorry, I said.  But they were already sick of hearing my voice.

Also, I just got out of a meeting from hell.


THE HEAVY BEAR THAT GOES WITH ME

Email ThisBlogThis!Share to TwitterShare to FacebookShare to Pinterest
Labels: Aargocalyptic, Autoblogography, My Complicity