Placed High in Jungle Trees or High on Scaffolds Alone in the Desert Until Buzzards, Vultures, and Harpy Eagles Stripped Their Bones Bare 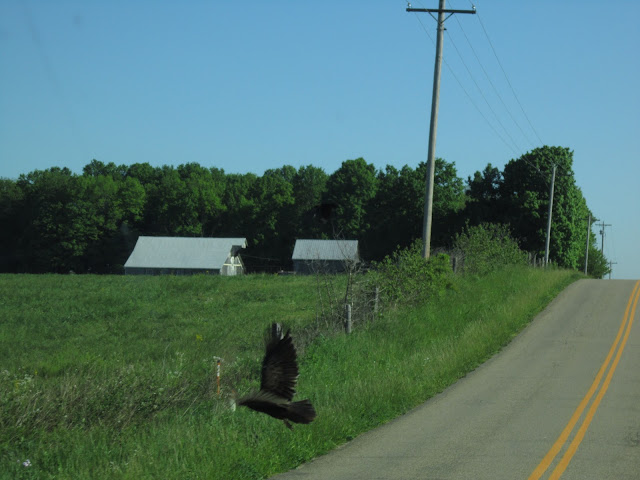 That's an Earthgirl photo of a buzzard chased from a woodchuck carcass on Grove Church Road between Martinsburg and Bamgier Ohio by the honking ass Ford Expedition we rented to pick up Planet from college yesterday. She's home, yay! When I download photos from the cameras to the PC I click a button to erase all images from the camera (no one fills up a card faster than Earthgirl), and when the erasing happens it's like a super speed slide show that in effect details the entire trip in thirty seconds like a movie. How do I do convert the file of photos on the PC into that fast a slide show and then post it here? Also too, have some links before they go stale, a poem, some songs. Also too, here's an oil tanker and an Amish buggy on Ohio 586 between Fallsburg and Martinsburg, near the Licking County/Knox County line: 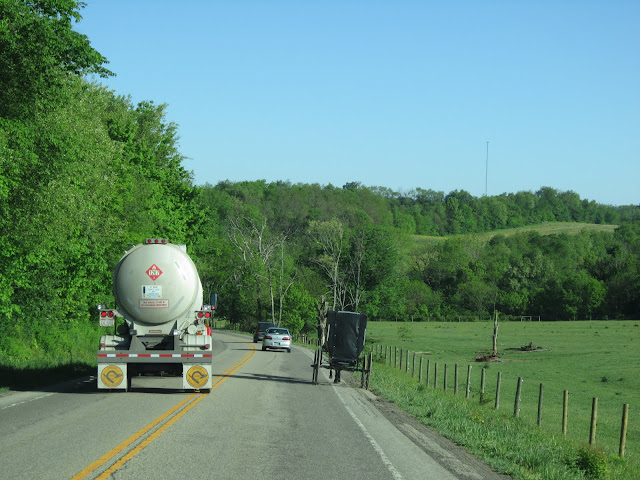 THE DEAD NEVER FIGHT AGAINST ANYTHING


It’s always been that way.
They’ve allowed themselves to be placed,
knees to chin, in the corners of caves
or in holes in the earth, then covered
with stones; they’ve let their fingers
be curled around old spears or diadems
or favorite dolls, the stems
of cut flowers.
Whether their skulls were cracked open
and their brains eaten by kin
or whether their brains were pulled
by tongs through their nostrils
and thrown into the dog’s dish as waste
are matters that have never concerned them.
They have never offered resistance
to being tied to rocks below the sea,
left for days and nights until their flesh
washed away or likewise to being placed
high in jungle trees or high on scaffolds
alone in the desert until buzzards,
vultures and harpy eagles stripped
their bones bare. They have never minded
jackals nosing at their haunches,
coyotes gnawing at their breasts.
The dead have always been so purely
tolerant. They’ve let their bones
be rubbed with ointments, ornamented
with ochre, used as kitchen ladles
and spoons. They’ve been imperturbably
indifferent to the removal of all
their entrails, the resulting cavities
filled with palm wine, aromatic
spices; they have lain complacently
as their abdomens were infused
by syringe with cedar oil.
They’ve allowed all seven
natural openings of their bodies
to be closed with gold dust.
They’ve been shrunken and their mouths
sewn shut; they’ve been wrapped
in gummed linen, corded, bound upright
facing east, hung above coals
and smoked, their ears stuffed
with onions, sent to sea on flaming
pyres. Not one has ever given
a single sign of dissent.
Oblivious to abuse. Even today,
you can hit them and pinch them
and kick them. You can shake them,
scream into their ears. You can cry.
You can kiss them and whisper and moan,
smooth their combed and parted hair, touch
the lips that yesterday spoke, beseech,
entreat with your finest entreaty.
Still, they stare without deviation,
straight into distance and direction.
Old stumps, old shameless logs, rigid
knurls, snow-faced, pitiless,
pitiless betrayal.