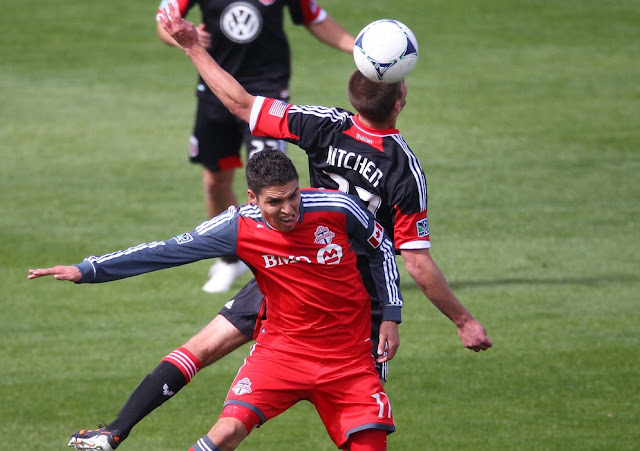 Toronto sucks, easily the worse team in MLS, they are as bad as 2010 United, but, disclaimers presented, I'm over-enthusiastically impressed with the win. Toronto sucks but a United back line of Najar, McDonald, Woolard, Korb pitching a shut-out? Najar saved a goal in the first half on a brilliant nod-away header? Boskovic entering after half-time (DeRossario moved forward, Pontius to wing) and United dominates possession, scores twice, the emergence of the Salihi we were advertised? Yes, it was Toronto, but it was also United's sixth game in three weeks, their legs were shot, their central defenders all injured, their all-star rookie was hammied, and to trot out a hoary sports cliche, good teams win the games they should no matter what. An impressive and satisfying and encouraging win.

Beating the Boskovic drum: I tweeted Goff during the first half after hearing that DeLeon didn't start and gave Louis Neal, not Boskovic, the start, asking Goff for his opinion on Olsen's choice, and he responded that Boskovic is both too slow and a liability defensively on the wing. I asked back, the defense, is it can't or won't but got no response. Fullback, in his post-game, writes:


Branko’s bag of subtle touches in tight spaces and languid playing style are at jarring contrast with the way the rest of the team wants to play. They’re racing about at 100 mph while he’s turning pirouettes in slow motion. He’s a lumbering post-up guy on a team built for the fast break.
And yet (and my advocacy may be a Fellowvich thing, knowing me and tribalism), Boskovic on corners and free kicks is the most exciting option United's had since Gomez was in his prime, and his vision on some of his passes is incredibly imaginative: he plays balls into space that take the runner into immediately dangerous positions. I'm not advocating United keep Boskovic come July with a new contract along the same terms as the one he's finishing; if he can't play flanks, if he can't or won't play defense, there are not enough minutes for him if DeLeon, Pontius, DeRossario, Salihi/Santos are on the field. I'm not sure what I am advocating other than I'd like to see more. (Actually, what I'd like to see is Pontius and DeLeon on the wings, Cruz on the bench, Boskovic at ten, DeRossario and Salihi/Santos up top, which will never happen until Cruz is crippled, so much does St. Benny love Cruz. And yes, I know I'm being stupid about Cruz' contributions, the dirty punkasshat.)

I am very curious to see this Saturday's away game versus Houston. I don't hold out much hope, which is more hope than I had before. Here's UnitedMania, here's Shatzer, more later if I see any, have highlights: