At Night Deer Drift from the Dark Woods and Eat My Garden. They're Like Enormous Rats on Stilts Except, of Course, They're Beautiful 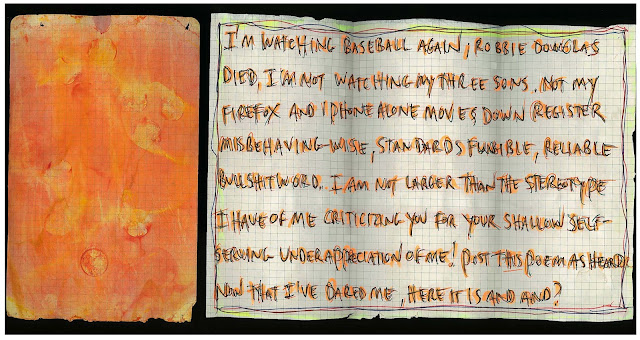 I'll keep the details to myself, but I'll never swap out songs again because yesterday was the greatest example of serendipity ever though I haven't the timestamp to prove it, but Sherman Helmsley, who knew? which both is and isn't the point, though yes, Thurston Moore is 54 today.

Our Father who art in heaven, I am drunk.
Again. Red wine. For which I offer thanks.
I ought to start with praise, but praise
comes hard to me. I stutter. Did I tell you
about the woman whom I taught, in bed,
this prayer? It starts with praise; the simple form
keeps things in order. I hear from her sometimes.
Do you? And after love, when I was hungry,
I said, Make me something to eat. She yelled,
Poof! You’re a casserole!—and laughed so hard
she fell out of the bed. Take care of her.

Next, confession—the dreary part. At night
deer drift from the dark woods and eat my garden.
They’re like enormous rats on stilts except,
of course, they’re beautiful. But why? What makes
them beautiful? I haven’t shot one yet.
I might. When I was twelve, I’d ride my bike
out to the dump and shoot the rats. It’s hard
to kill your rats, our Father. You have to use
a hollow point and hit them solidly.
A leg is not enough. The rat won’t pause.
Yeep! Yeep! it screams, and scrabbles, three-legged, back
into the trash, and I would feel a little bad
to kill something that wants to live
more savagely than I do, even if
it’s just a rat. My garden’s vanishing.
Perhaps I’ll merely plant more beans, though that
might mean more beautiful and hungry deer.
Who knows?
I’m sorry for the times I’ve driven
home past a black, enormous, twilight ridge.
Crested with mist, it looked like a giant wave
about to break and sweep across the valley,
and in my loneliness and fear I’ve thought,
O let it come and wash the whole world clean.
Forgive me. This is my favorite sin: despair—
whose love I celebrate with wine and prayer.

Our Father, thank you for all the birds and trees,
that nature stuff. I’m grateful for good health,
food, air, some laughs, and all the other things
I’m grateful that I’ve never had to do
without. I have confused myself. I’m glad
there’s not a rattrap large enough for deer.
While at the zoo last week, I sat and wept
when I saw one elephant insert his trunk
into another’s ass, pull out a lump,
and whip it back and forth impatiently
to free the goodies hidden in the lump.
I could have let it mean most anything,
but I was stunned again at just how little
we ask for in our lives. Don’t look! Don’t look!
Two young nuns tried to herd their giggling
schoolkids away. Line up, they called. Let’s go
and watch the monkeys in the monkey house.
I laughed, and got a dirty look. Dear Lord,
we lurch from metaphor to metaphor,
which is—let it be so—a form of praying.

I’m usually asleep by now—the time
for supplication. Requests. As if I’d stayed
up late and called the radio and asked
they play a sentimental song. Embarrassed.
I want a lot of money and a woman.
And, also, I want vanishing cream. You know—
a character like Popeye rubs it on
and disappears. Although you see right through him,
he’s there. He chuckles, stumbles into things,
and smoke that’s clearly visible escapes
from his invisible pipe. It makes me think,
sometimes, of you. What makes me think of me
is the poor jerk who wanders out on air
and then looks down. Below his feet, he sees
eternity, and suddenly his shoes
no longer work on nothingness, and down
he goes. As I fall past, remember me.