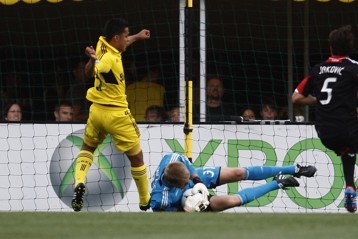 I got home from a big family dinner celebrating my father's 80th birthday just in time to see Chris Korb slam a shot off the left post and then four minutes of stoppage, so I can't offer much. Olsen started Neal in place of Boskovic (dude, calf?) instead of pulling DeRossario back and moving Pontius back up top which surprised me. Goff says offense sucked all night and I can believe it. Noises made by Benny (though not blustery) and Pontius re: digging-in for effort, but let me suggest this: MLS front-loaded United's schedule, United rounded into form, MLS gave them a fucking month off and then two road games (plus Najar is away at the motherfuckingly stupidass motherfucking Olympics, of which I will watch not a motherfucking second) and these are like preseason games re: chemistry, see lack thereof.

Here's Shatzer, here's Webb (who suggests schedule issue too), here's some guy at Ives, lose the pop-ups, Galarcep, more if and when I find them, or not.
Posted by BDR at 8:51 AM