United 2, Metros 2, or: Yesterday, the Teacher Didn't Believe the Excuse Her Student Offered for Missing His Appointment— a Tire Gone Flat on the Thruway—but Today His Story Seems Almost Convincing 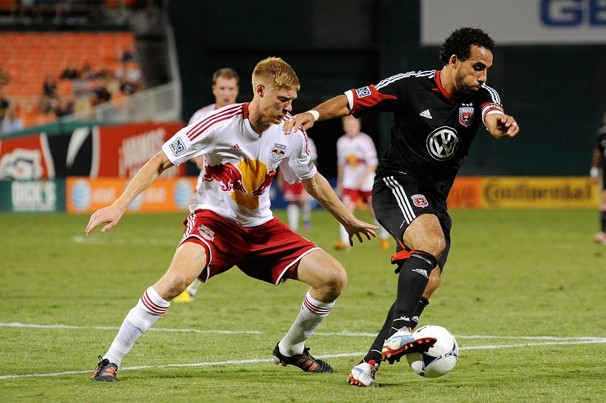 Didn't see it. Obstacles won. I wish I felt guiltier, once I would have been distraught. I could have made it, once I would have obstacle-coursed my way to the game without second thought of the shit I'd have to eat the next day. An early gag on this shitty blog was a trope, haven't used it in years, something like no one asks me how I distinguish between my politics and my soccer. There's a new professor here at Illtophay teaching a course on sports and nationalism, I've seen the syllabus, I'm going to read some of her assignments, there's a guy over in Because Left who blogs/writes/tweets about soccer and politics, check him out. I'm fascinated by this shit, see metaphors abounding, especially, essentially, about my rubity's influence in my negotiations with my complicity. The waxing and waning of complaint and resistance, compliance and submission, damn and undamn. This is why no one ever asked me how I distinguish between my soccer and politics, everyone no doubt aware that I'd tell them more than I do already.

Just yesterday my poem lamenting the power
Of time to sweep away all trace of the beautiful
Seemed done at last, but the light this morning
Shows it to be a sketch, evidence that my vision
Cleared as I slumbered, that my sense of beauty
Grows in the night like corn or bamboo.

Maybe a poem in praise of time
Ought to be next on my agenda,
The time required for seeds to open,
For leaves to push out on tender stems.

Yesterday, the teacher didn't believe the excuse
Her student offered for missing his appointment—
A tire gone flat on the Thruway—but today
His story seems almost convincing,
Suggesting how quickly the bruise to her ego
Has begun to heal, the first small step
From the tiresome realm of insult and umbrage.

Yesterday the lover couldn't commit himself.
Today he wants to write his beloved
A check for a million dollars,
Though the time hasn't come, he admits,
For her to cash it.
Meanwhile, though he has nothing,
Whatever he has is hers.