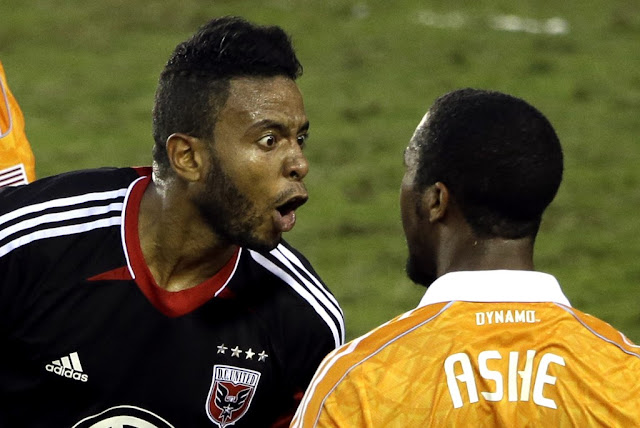 I missed the last 23 minutes plus stoppage, but United was devastated by injuries and gassed before and deflated after some Brazilian kid in a United kit with a really stupid haircut drilled an open shot into an almost-empty net, hitting the only thing that could stop a game-changing goal, Bobby Boswell's face (and then, making the attempt lamer, he didn't hit Bobby Boswell in the face with the ball hard enough), so going from 1-1 when I tuned out to 3-1 loss doesn't surprise me, I'm guessing it could have been worse. Be happy the return leg is next Sunday, not this Wednesday night, who the fuck would United start? Who the hell are they going to start Sunday? (And I pause to ask all United fans to send a hearty FUCK YOU! to Andy Najar, you dumb motherfucker, thanks a pantload for your petulance.) And yes, the call that wasn't, as bad a call in a season of bad calls, call the waambulance. But as bad as MLS refereeing has been, is, and always will be, what stinks of rinkydink is MLS stretching the season over seven months and then condensing their stupidass playoffs into two fucking weeks. Yes, both teams play the same schedule, it makes for shitty and rinkydink soccer. Here's Goff, here's Shatzer, here's Martin.
Posted by BDR at 10:02 AM