Into What Bulk Has Method Disappeared? 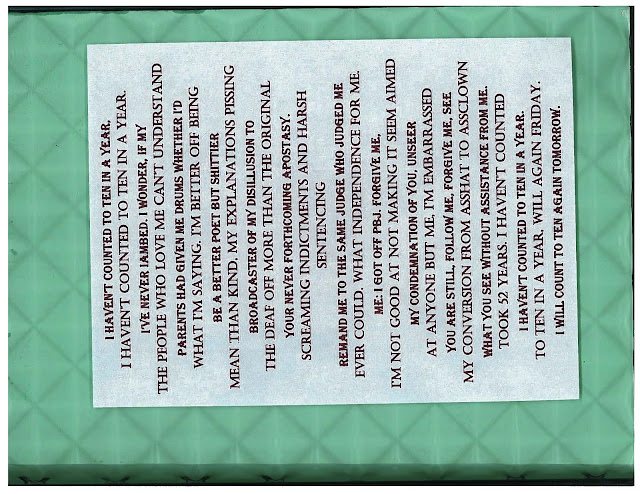 I'm constantly shedding a belief system, haven't yet come near addressing my need for a belief system. This is backwards, yes, I've known for decades. My semi-annual apologies for hectoring you. I've fallen hard out of love with a particular uniform, not fallen out of love with or lost the need for loving a particular uniform at any and all times. I'm barking loudly at the throw-rug of my lost faith, sacrificing nothing, overvaluing my bark's self-scourging currency. Abandoning whatever silliness I zealously held as beyond reproach doesn't make me less a zealot, it makes me zealously anti-whatever I was zealous for before, a gleefully desperate zealot deliberately in a vacuum.

Songs here today signify nothing other than they're in my head. Yes, I post this Thom Gunn poem (many Thom Gunn poems) all the time. Will again. Blooger stopped allowing me to change the font size of the blog title three, four days ago, something I do often when I post blogheaders at night, usually from 730 to 730, three, four nights a week. I go to Dashboard - Template - Customize - Blog Title, I'm told now the blog title is 16 point Ariel in maroon. Will not change no matter what I try. Five, six days ago a new edition of Misha Glenny's History of the Balkans came out on a new book truck, being Balkan I grabbed it, opened it, thumbed it, read of the Slaughter of the Knezes, saw Knez in Cyrillic, copied and pasted to sub-title field in Dashboard - Layout, and now this blog's title is 80 point New Times Roman in white though the gears say 16 point Ariel in maroon no matter what I click and save to change it. The situation is flavorful, it's juicy, it's well-prepared, it's the universal truth, that's effing good ham. Links return sooner enough or later enough.


Nightmare of beasthood, snorting, how to wake.
I woke. What beasthood skin she made me take?


Or cat that prettily pounces on its meat,
Tortures it hours, then does not care to eat:


Parrot, moth, shark, wolf, crocodile, ass, flea.
What germs, what jostling mobs there were in me.


These seem like bristles, and the hide is tough.
No claw or web here: each foot ends in hoof.


Into what bulk has method disappeared?
Like ham, streaked. I am gross—grey, gross, flap-eared.


The pale-lashed eyes my only human feature.
My teeth tear, tear. I am the snouted creature


That bites through anything, root, wire, or can.
If I was not afraid I’d eat a man.


Oh a man’s flesh already is in mine.
Hand and foot poised for risk. Buried in swine.


I root and root, you think that it is greed,
It is, but I seek out a plant I need.


Direct me gods, whose changes are all holy,
To where it flickers deep in grass, the moly:


Cool flesh of magic in each leaf and shoot,
From milky flower to the black forked root.


From this fat dungeon I could rise to skin
And human title, putting pig within.


I push my big grey wet snout through the green,
Dreaming the flower I have never seen.