It Was Sad, Exciting, and Horrible. It was Exciting, Horrible, and Sad. It Was Horrible, Sad, and Exciting. It Was Inviting, Mad, and Deplorable. It Was Adorable, Glad, and Enticing

I'm leaving Momcat topside in daylight for today, headers usually posted between 1930 and 730 give or take. Writing about the ferals is even less popular than bleggalgazing (though this is of course bleggalgazing) or writing about Ishiguro or United. I subscribe to my neighborhood's listserv (or one of many, I'd guess), a recent thread is the vermin feral cats represent. RABIES! Feral cats ripped my flesh, rzzzz, Zappadan and all. Disappearances of goldfinches, did you know Parkwood once was world famous for its goldfinch population, flashes yellow and black summer long, people traveled near and far for Parkwood's famous goldfinches? Join your neighborhood's listservs, find out how glorious your neighborhood once never was in old farts' memories. Someone said the martins disappeared, there's not a house(martin) in Parkwood with more than a quarter-acre lot, all of it wooded, I love martins, there aren't and weren't martins in Parkwood. But I have seen Frankie with a bluejay in his mouth (Earthgirl gasped, Frankie opened his mouth, the jay flew away), seen Frankie with a mockingbird that escaped when I clapped, Momcat with a nuthatch, no playing, just dinner, Napoleon with no birds, asleep on the sofa after all he could eat dinners. I do understand the anger towards ferals of the person whose yard is full of bird feeders, who stands at his window all day with binoculars and camera even as sets them down to type an email to a neighborhood listserv demanding the ferals be trapped and killed like plague-bearing rats. We probably nod and smile and make small talk when we come upon the other on neighborhood walks. As always, fine metaphors abound. 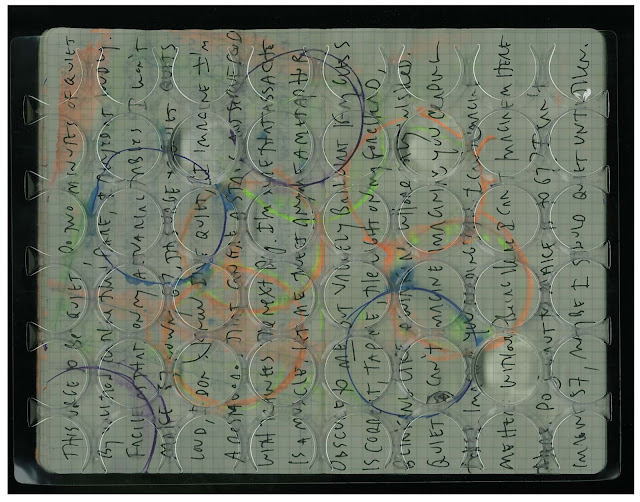 Eventually we must combine nightmares
an angel smoking a cigarette on the steps
of the last national bank, said to me.
I put her out with my thumb. I don’t need that
cheap talk I’ve got my own problems.
It was sad, exciting, and horrible.
It was exciting, horrible, and sad.
It was horrible, sad, and exciting.
It was inviting, mad, and deplorable.
It was adorable, glad, and enticing.
Eventually we must smoke a thumb
cheap talk I’ve got my own angel
on the steps of the problems the bank
said to me I don’t need that.
I will take this one window
with its sooty maps and scratches
so that my dreams will remember
one another and so that my eyes will not
become blinded by the new world.

The flames don’t dance or slither.
They have painted the room green.
Beautiful and naked, the wives
are sleeping before the fire.
Now it is out. The men have
returned to the shacks,
slaved creatures from the forest
floor across their white
stationwagons. That just about
does it, says the other, dumping her bucket
over her head. Well, I guess
we got everything, says one,
feeling around in the mud,
as if for a child.
Now they remember they want
that mud, who can’t remember
what they got up for.
They parcel it out: when
they are drunk enough
they go into town with
a bucket of mud, saying
we can slice it up into
windmills like a bloated cow.
Later, they paint the insides
of the shack black,
and sit sucking eggs all night,
they want something real, useful,
but there isn’t anything.