The Ruined Banisters of the A, a Bridle-Ring of the O, the Saddle of the U 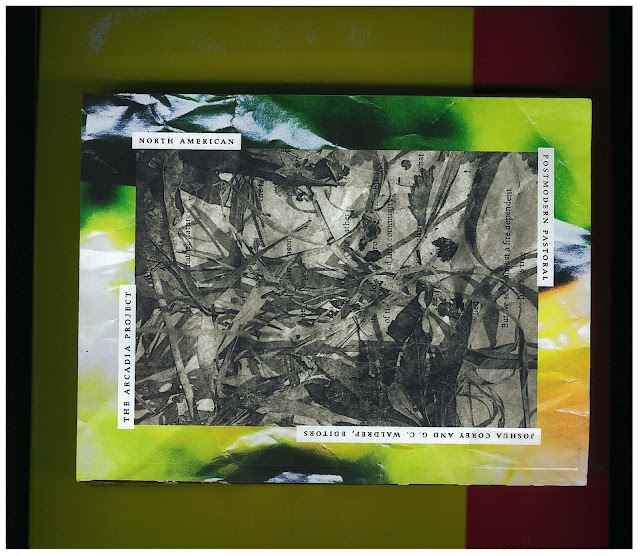 Wowee, this was on a new book cart yesterday, I've already read the first five poems, I've already bought my copy from the publisher, I hope I get it by Monday before we head for Ohio Tuesday - more tomorrow, someone turns twenty - so I can beat it up in my hands and write in the margins like a book of poetry needs to be read and held and dog-eared and underlined and loved, here, have this poem:


THE VOWELS PASS BY IN ENGLISH

-& the owl drops flowers
from its eyes [Dentaria californica]
the raceme, the stubbed stem lands straight
in the woods - as the ancients do;
on a hazel branch, a cocoon
hoists itself.... with a worm's mind -;

i-eee is released in winter
as humans hold bones to the fire -
they were there a long time,
(interpreting the dead loves
as meaning seeped through the cracks
of centuries held by everyone --);

the ocean rises by inches -- when
the wave withdraws, plovers pick evidence
from married footprints as the lyric does,
or sanity... Luminescent creatures
sink red in the sand --
for they have swallowed... all 3 sunsets!

& the vowels pass by in English,
the ruined banisters of the A, a bridle-
ring of the O, the saddle of the U
brought from the underworld;
I had to negotiate with devils
to retrieve even this much
from the language of the colonizers.


Wowee, huh? I tweeted in defeat Monday night that I am utterly incapable of reading fiction, as in I can read it for half an hour but none of it sticks. I've bitched about as it's steadily got worse the past three years, but here's good or bad news depending on moment: the guilt, the panic is easing. If I can just stop buying fiction I can't read in effort to fix the problem I'll save money too. HEY! tonight me and Earthgirl and Hamster see this guy:

near/gaseous twigs lacking fluency in the chunks of branch pipe
rot centered shade, and the shade of the thrush
stained by the suthering wind, loosens from the
other, bit-green/brown flap of sound, restart, touring on its side, a grass/attempt
sticking
with snow seen by, it brushing/delineated yellow ashes of human dropped
forsythia like thrush, who handles its world when it looks away, the
powers are marching hitherward it is known before
where they arrive they move
belike some things I know not what/whatever, cannot hear them, cannot hear
thrush now, I think we should slaughter them