No, It Won't Do, My Sweet Theologians, or: Born Eighty-Seven Years Ago, or: United 0, Portland 2


Miles Davis was born eighty-seven years ago today. Thanks to Hamster for the playlist, it's last year's cped here because what worked last year works this year. I repeat myself: I've only so many hours and only two ears, I've huge gaps of knowledge lots of places, in this particular case jazz. Anyone wanting to add a song to this post please let me know.

I repeat myself: my soccer teams sucks, I mean really sucks, I mean historically sucks, I mean it's broken on so many and all levels. Is it time to fire St Benny of Olsen? Have some quotes: Coach Ben Olsen seethed about his team’s lack of toughness and again promised personnel changes. Captain Dwayne DeRossario voiced his anger about being benched and questioned Olsen’s handling of the roster. Others spoke in soft, disappointed tones, gutted by another dreary performance. “It’s embarrassing how soft we are, everywhere around the field,” Olsen said, his voice rising. “We had just a couple individuals really show up and show that this really [expletive] matters. I’ve had it with that part. “We’re going to get new guys in here because we are not good enough. It seems like we are always a player or two short every time I fill out my starting lineup. You can put that on me, but that is not going to continue.” Olsen’s decision to drop De Rosario from the lineup didn’t go over well with the veteran attacker. Asked if he was surprised by the move, De Rosario said: “ ‘Surprised’ is not the word. . . . I’m definitely not” happy. Neither am I - I recognize that my fandom has always been based on love of tribalism - the uniforms, the standing and chanting, etc and so forth - and as my tribalism in other areas of life has (mostly for the good) eroded, so has my ardor for soccer in general and United in particular. Five years ago I would never miss a game unless there were conflicts of schedule so dire as missing them would have caused grief at home, I've missed three games this year because, in one instance, I wanted to disc golf, in another because I was working in tablet. It doesn't help my case of noble de-tribalization that United is 1-9-2, has four points out of thirty-six, it'd be much more convincing a case if United was 9-1-2 with twenty-nine of thirty-six points and I was skipping games to disc golf. It'd be nice to give less of a fuck about something good than not giving a fuck about something shitty. Fine metaphors abound. 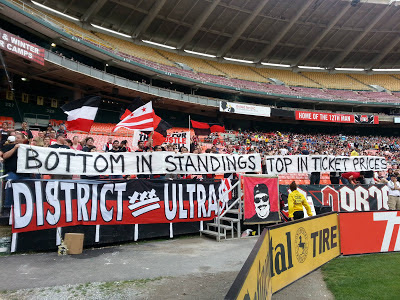 As for firing St Benny of Olsen, here's the thing: he's no more broken than the players, the front office, and especially the new assholes in ownership who don't give a flying fuck about anything but a new stadium in DC or elsewhere. A new coach isn't going to make Brandon McDonald (just to pick one player, not to single him out, he sucks no worse than anyone else) better, isn't going to make Dave Kasper smarter, isn't going to make Erick Thohir or Jason Levien give a shit about the product as long as it's based on East Capitol Street. But Benny is broken - his stomping his feet and screaming about effort act, which seems to be his only act, is now beyond useless, it's counter-productive. If he survives it'll be for no grander reason that ownership won't want to buy out his contract while paying the freight for a new coach too.

And when I looked out at dawn once again, an apple tree laden with
fruit stood there.

Many years had probably gone by but I remember nothing of what
happened in my sleep.