A Man Appeared Out of an Alley and Stopped Me and Said, "Did You See That Man Made Out of Leaves Go By?" 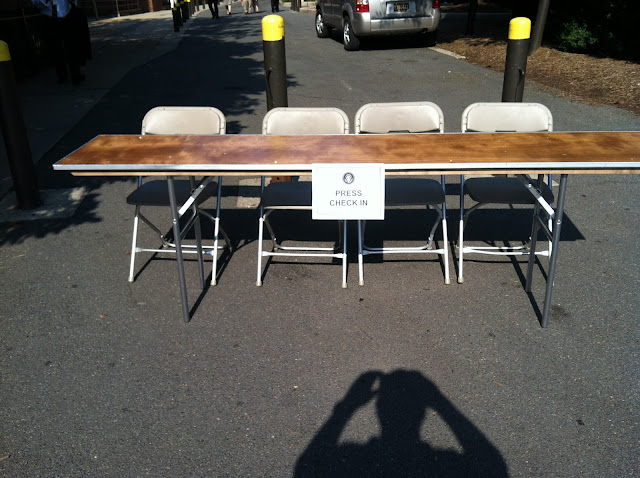 So, um, about three and a half hours from the time I type this sentence and a hundred yards from the cube in which I'm sitting the President is giving a speech. Security is swarming campus, no one can cross campus, I can only imagine the activity on the roof of the building I work in. Good news though: a friend of mine emails to say she may be sitting at that table if any of those assigned need a break, and as such reminds me of a Pere Ubu song, one I've played already this Month of David Thomas Songs but which I now play again.

I saw someone coming in the distance, but couldn't make out who it was. The closer they got the more blurred the face became. Until finally I saw it was just a whirlwind of leaves. It was only me on a football field walking toward the street with my handbag thrown over my shoulder with this big funnel of leaves coming toward me like a man. Then it passed me and went up the street. And then it disappeared. I walked on, toward the bank where I had some business to do. A man appeared out of an alley and stopped me and said, "Did you see that man made out of leaves go by?" "I did, could have fooled me," I said. "Hey, do you suppose you could lend me a dollar for a cup of coffee?" "No, I can't. I'm on my way to the bank," I said. I left him there and went on my way. Pretty soon a little boy crossed my path. He stopped me in my path and said, "I know who you are. You're the Man-of-Leaves. You just took your coat off. You can't fool me." "You're a pretty smart fellow, but you're wrong this time," I said, and went on my way. When I got to the bank I went in and waited to see an officer. When I saw one was free I went in. In the chair behind the desk sat a pile of leaves. It said, "Can I help you?" I stumbled at first, but managed to say, "I'm looking for a small loan, a thousand dollars for, say, twelve months." "Of course. Would you like a 4 1/2% or a 5 1/2% loan?" it said. "I'd like the 4 1/2% if you don't mind," I said. "Very good choice," it said. It made out the paper and handed them to me. "Have a nice day," it said. "It's windy out there," I said. "You're telling me," it said, smoothing himself with satisfaction.

Have a great four years.