In a Corner of the Labyrinth of Fences


This is the marina house and marina in Deale, Maryland that Earthgirl and I lived in for two and a half years years from January 1988 through Summer 1990 at the beginning of our marriage. The family friend who owns the marina and rented us the house in 1988 thought we'd enjoy seeing the inside of the house in 2013 - he's between renters and he's made improvements on the interior since 1990, the last time we were inside the house - so yesterday Earthgirl and I and Planet and Ari drove down. Photos and paragraphs for the five or six of you who've been there though not for twenty-three years.

One Deale story: I went out for coffee one Sunday morning to the 7-11, crowded because it was the only place open for five miles in any direction, so I parked next to the dumpster. Come out with two coffees, set them on the roof of an off-gold Honda Civic hatchback (which was stolen from the street at the next house we lived in in Glen Echo), and I hear whimpering inside the dumpster. Eight week old puppy in a taped cardboard box. Katie. 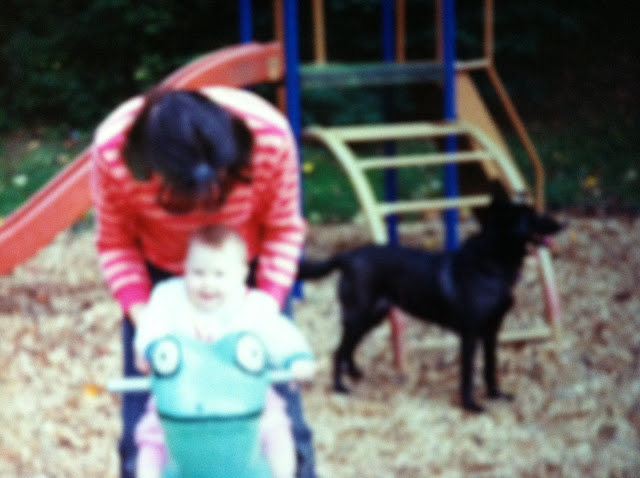 Our family friend and former landlord also took us to his farm in Calvert County (the blueberries are five or six days from perfect, dang), then took us to lunch at a cafe back in Deale that served - and I shit you not - the best homemade crab-cakes and tartar sauce and cole slaw and fries I have ever eaten. I shit you not. Over lunch he treated us - kindly, gently, avuncularly, as if giving us advice he doesn't give to any but family - to his inner Rush Limbaugh on economic matters and inner Michael Savage on classifications of work habits of particular racial groups. No, I mean he cites with approval assertions Limbaugh and Savage make. Always has. He's a retired world class psychiatrist who has saved the lives of countless broken and hurting people, he is one of the kindest, most generous persons I've known in my lifetime. I nodded and ate.


The landscape (the landscape!) again: Gloucester,
the shore one of me is (duplicates), and from which
(from offshore, I, Maximus) am removed, observe.
In this night I moved on the territory with combinations
(new mixtures) of old and known personages: the leader,
my father, in an old guise, here selling books and manuscripts.
My thought was, as I looked in the window of his shop,
there should be materials here for Maximus, when, then,
I saw he was the young musician has been there (been before me)
before. It turned out it wasn’t a shop, it was a loft (wharf-
house) in which, as he walked me around, a year ago
came back (I had been there before, with my wife and son,
I didn’t remember, he presented me insinuations via
himself and his girl) both of whom I had known for years.
But never in Gloucester. I had moved them in, to my country.
His previous appearance had been in my parents’ bedroom where I
found him intimate with my former wife: this boy
was now the Librarian of Gloucester, Massachusetts!

Black space,
old fish-house.
Motions
of ghosts.
I,
dogging
his steps.
He
(not my father,
by name himself
with his face
twisted
at birth)
possessed of knowledge
pretentious
giving me
what in the instant
I knew better of.
But the somber
place, the flooring
crude like a wharf’s
and a barn’s
space
I was struck by the fact I was in Gloucester, and that my daughter
was there—that I would see her! She was over the Cut. I
hadn’t even connected her with my being there, that she was
here. That she was there (in the Promised Land—the Cut!
But there was this business, of poets, that all my Jews
were in the fish-house too, that the Librarian had made a party
I was to read. They were. There were many of them, slumped
around. It was not for me. I was outside. It was the Fort.
The Fort was in East Gloucester—old Gorton’s Wharf, where the Library
was. It was a region of coal houses, bins. In one a gang
was beating someone to death, in a corner of the labyrinth
of fences. I could see their arms and shoulders whacking
down. But not the victim. I got out of there. But cops
tailed me along the Fort beach toward the Tavern
The places still
half-dark, mud,
coal dust.
There is no light
east
of the Bridge
Only on the headland
toward the harbor
from Cressy’s
have I seen it (once
when my daughter ran
out on a spit of sand
isn’t even there.) Where
is Bristow? when does I-A
get me home? I am caught
in Gloucester. (What’s buried
behind Lufkin’s
Diner? Who is