His Speech Obsessed with Oaths, Demons, His Tongue Calling Forth the Foul Fiend 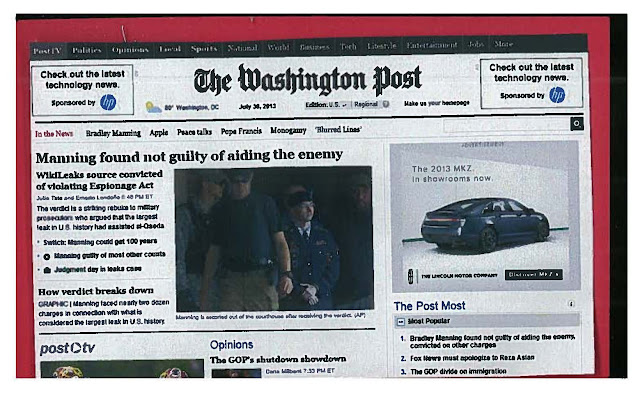 Screenshot from 8:30 last night. No one expected a different outcome, the multiple guilty verdicts. No other outcome was possible, there was never a chance Manning wouldn't spend the rest of his life in jail, something Manning knew when he went to Wikileaks. Military prosecutors dealt striking rebuke? Here's how nuts I am: I suspect the aiding the enemy charge was made so it could be rejected, the resulting See! See! it's not an inhumane system for an Oathbreaker! Fucking Oathbreaker!  conveniently distracting reminders of Manning's previous torture before trial and subsequent miserable life in prison after. Not to mention distracting from what Manning revealed about what this country does. I also believe it entirely possible Power wanted Manning as damned as they could. Yes, I'd bet it's the latter, I've heard the defense that Power is so brutal in its inept execution of will I should stop confusing institutional violence with motive: power means well but oops. Still, I ask you, of those two choices, which is more proof of American decadence?

But where, oh where is the holy idiot,
truth teller and soothsayer, familiar

homeless and housed, with awe and fear?
Is he hiding in the pit of the walkie-talkie,

its grid of holes insatiably hungry,
almost like a baby, sucking in the police

sergeant's quiet voice as he calls in reinforcements?
Oh holy idiot, is that you sniffing the wind

for the warm turd smell on the mounted policemen
backing their horses' quivering, skittish

haunches into the demonstrators' faces?
Oh little village among the villages,

the wild man, the holy Bedlamite is gone,
and nobody, now, knows where to find him...

for a warm soft place to lie his body down,
his speech obsessed with oaths, demons,

his tongue calling forth the Foul Fiend, Flibbertigibbet
as the horses back slowly, slowly into the crowd

and he eats filth, he crams his ravenous mouth with filth—
and then he sits on his stool in the trampled hay

and deep-rutted mud, he anoints himself
with ashes and clay, he puts on his crown

of fumiter weed and holds his scepter
of a smouldering poker and calls the court to order.