I Built, of Blocks, a Town Three Hundred Thousand Strong, Whose Avenues Were Paved with a Wine-Colored Rug and Decorated by Large Leaves Outlined Inappropriately in Orange, and on This Leafage I'd Often Park My Tootsie Toy Trucks, as If on Pads of Camouflage, Waiting Their Deployment Against Catastrophes Which Included Alien Invasions, Internal Treachery, and World War 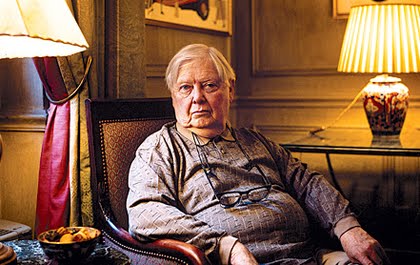 William Gass is eighty-nine today. This is the traditional William Gass birthday post excerpt: from The Tunnel:

Like I said last year, that passage reminds me of a what I was trying to get at (much less successfully than Gass) with automocoblogography. Still, it's one of my favorite things I've written, and remember that template?

Excerpt from The Tunnel

I built, of blocks, a town three hundred thousand strong, whose avenues were paved with a wine-colored rug and decorated by large leaves outlined inappropriately in orange, and on this leafage I'd often park my Tootsie Toy trucks, as if on pads of camouflage, waiting their deployment against catastrophes which included alien invasions, internal treachery, and world war. It was always my intention, and my conceit, to use up, in the town's construction, every toy I possessed: my electronic train, of course, the Lincoln Logs, old kindergarten blocks—their deeply incised letters always a problem—the Erector set, every lead soldier that would stand (broken ones were sent to the hospital), my impressive array of cars, motorcycles, tanks, and trucks—some with trailers, some transporting gas, some tows, some dumps—and my squadrons of planes, my fleet of ships, my big and little guns, an undersized group of parachute people (looking as if one should always imagine them high in the sky, hanging from threads), my silversided submarines, along with assorted RR signs, poles bearing flags, prefab houses with faces pasted in their windows, small boxes of a dozen variously useful kinds, strips of blue cloth for streams and rivers, and glass jars for town water towers, or, in a pinch, jails. In time, the armies, the citizens, even the streets would divide: loyalties, friendships, certainties, would be undermined, the city would be shaken by strife; and marbles would rain down from formerly friendly planes, steeples would topple onto cars, and shellfire would soon throw aggie holes through homes, soldiers would die accompanied by my groans, and ragged bands of refugees would flee toward mountain caves and other chairs and tables.