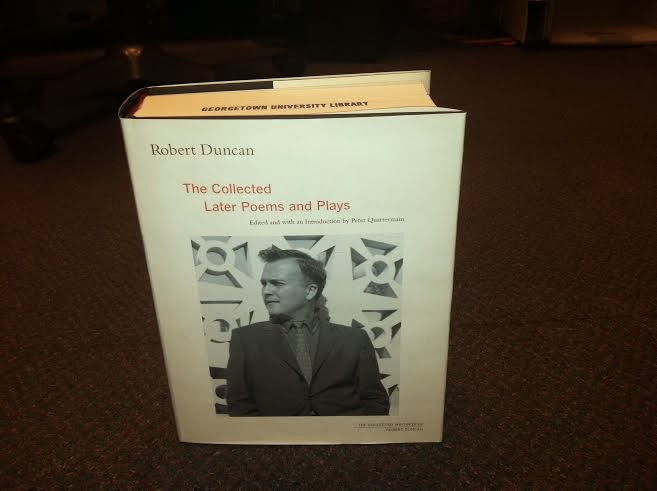 That behemoth was on a new book truck last week. I hadn't thought of Robert Duncan in years. I read some poems in my 20s at friends' recommendations; I liked what I read when it was handed to me or I stumbled upon it in a magazine or journal, and while it didn't sing to me enough to stay in my head it didn't screech at me enough to discourage me from picking up that behemoth off the new book truck last week. I opened it at random and this is the first poem I read:

He brought a light so she could see
Adam move nakedly in the lighted room.
It was a window in the tree.
It was a shelter where there was none.

She saw his naked back and thigh
and heard the notes of a melody
where Adam out of his nature came
into four walls, roof, and floor.

He turnd on the light and turnd back,
moving with grace to catch her eye.
She saw his naked loneliness.

Now I shall never rest, she sighd,
until he strips his heart for me.
The body flashes such thoughts of death
so that time leaps up, and a man's hand

reflects upon itself in a bare room.

In the questioning phrase the voice
-- he raises his eyes from the page --
follows towards some last
curve of the air, suspended above

its sign, that point, that  .
And asks, Who am I then?
Where am I going? There is no time
like now that is not like now.

Who?      turns upon some body where
the hand striving to tune
curves of the first lute whose strings are nerves
sees in the touch the phrase will

rise    .    break
as the voice does? above some moving obscurity

ripples out in the disturbd pool,
shadows and showings where we would read
-- raising his eyes from the body's lure --

what the question is,
where the heart reflects.

So, I know more of what I'll be reading this year. And praise, of course, to Serendipity. Yesterday, reading through Silliman's lastest lit-links, I found Robert Duncan and Jess, and Their Wonderland of Art. I did know that Jack Spicer was Duncan's "rivalrous frenemy," though I confess, rereading Spicer as much as I do it didn't occur to me to pick up Duncan. I did not know that "Duncan’s parents had been committed Theosophists who told him he was a spiritually chosen being, a former citizen of Atlantis, no less."

It’s in the perilous boughs of the tree
out of blue sky    the wind
sings loudest surrounding me.


part out of longing,   part     daring my self,
part to see that
widening of the world,   part


to find my own, my secret
hiding sense and place, where from afar
all voices and scenes come back


I’ve been where you