This Admirable Gadget, When It Is Wound on a Strong and Spun with Steady Force, Maintains Its Balance on Most Any Smooth Surface, Pleasantly Humming as it Goes

My brother Elric is 53 today, Happy Birthday! He reads occasionally, not as often as he once did before we fell out over Chelsea Manning but I'm told more often than I thought. 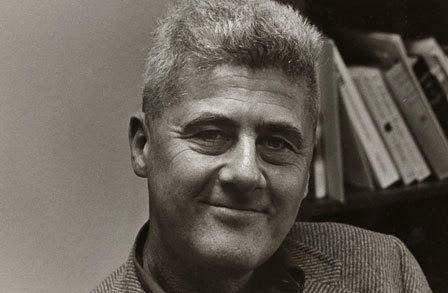 Howard Nemerov was lucky enough to be born on February 29th, since March 1 belongs to Chopin and Richard Wilbur and Robert Lowell, I give today to Nemerov, born 23.5 years ago if you only count February 29ths.

This admirable gadget, when it is
Wound on a string and spun with steady force,
Maintains its balance on most any smooth
Surface, pleasantly humming as it goes.
It is whirled not on a constant course, but still
Stands in unshivering integrity
For quite some time, meaning nothing perhaps
But being something agreeable to watch,
A silver nearly silence gleaning a still-
ness out of speed, composing unity
From spin, so that its hollow spaces seem
Solids of light, until it wobbles and
Begins to whine, and then with an odd lunge
Eccentric and reckless, it skids away
And drops dead into its own skeleton.

The cursive crawl, the squared-off characters
these by themselves delight, even without
a meaning, in a foreign language, in
Chinese, for instance, or when skaters curve
all day across the lake, scoring their white
records in ice. Being intelligible,
these winding ways with their audacities
and delicate hesitations, they become
miraculous, so intimately, out there
at the pen’s point or brush’s tip, do world
and spirit wed. The small bones of the wrist
balance against great skeletons of stars
exactly; the blind bat surveys his way
by echo alone. Still, the point of style
is character. The universe induces
a different tremor in every hand, from the
check-forger’s to that of the Emperor
Hui Tsung, who called his own calligraphy
the ‘Slender Gold.’ A nervous man
writes nervously of a nervous world, and so on.


Miraculous. It is as though the world
were a great writing. Having said so much,
let us allow there is more to the world
than writing: continental faults are not
bare convoluted fissures in the brain.
Not only must the skaters soon go home;
also the hard inscription of their skates
is scored across the open water, which long
remembers nothing, neither wind nor wake.

THE MURDER OF WILLIAM REMINGTON

It is true, that even in the best-run state
Such things will happen; it is true,
What’s done is done. The law, whereby we hate
Our hatred, sees no fire in the flue
But by the smoke, and not for thought alone
It punishes, but for the thing that’s done.


And yet there is the horror of the fact,
Though we knew not the man. To die in jail,
To be beaten to death, to know the act
Of personal fury before the eyes can fail
And the man die against the cold last wall
Of the lonely world—and neither is that all:


There is the terror too of each man’s thought,
That knows not, but must quietly suspect
His neighbor, friend, or self of being taught
To take an attitude merely correct;
Being frightened of his own cold image in
The glass of government, and his own sin,


Frightened lest senate house and prison wall
Be quarried of one stone, lest righteous and high
Look faintly smiling down and seem to call
A crime the welcome chance of liberty,
And any man an outlaw who aggrieves
The patriotism of a pair of thieves.