Dearest I Cannot Loiter Here in Lather Like a Polar Bear 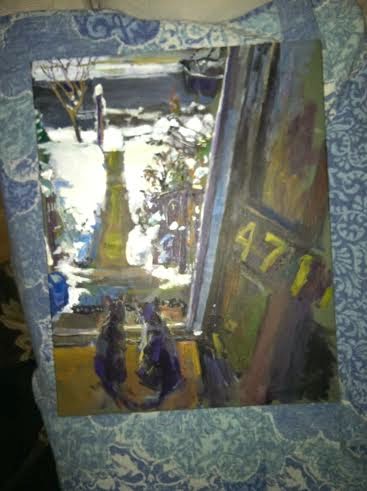 HOME AFTER THREE MONTHS AWAY

Gone now the baby's nurse,
a lioness who ruled the roost
and made the Mother cry.
She used to tie
gobbets of porkrind in bowknots of gauze--
three months they hung like soggy toast
on our eight foot magnolia tree,
and helped the English sparrows
weather a Boston winter.

Three months, three months!
Is Richard now himself again?
Dimpled with exaltation,
my daughter holds her levee in the tub.
Our noses rub,
each of us pats a stringy lock of hair--
they tell me nothing's gone.
Though I am forty-one,
not forty now, the time I put away
was child's play. After thirteen weeks
my child still dabs her cheeks
to start me shaving. When
we dress her in her sky-blue corduroy,
she changes to a boy,
and floats my shaving brush
and washcloth in the flush. . . .
Dearest I cannot loiter here
in lather like a polar bear.

Recuperating, I neither spin nor toil.
Three stories down below,
a choreman tends our coffin's length of soil,
and seven horizontal tulips blow.
Just twelve months ago,
these flowers were pedigreed
imported Dutchmen; no no one need
distinguish them from weed.
Bushed by the late spring snow,
they cannot meet
another year's snowballing enervation.

I keep no rank nor station.
Cured, I am frizzled, stale and small.