The Deaf Vocation of a Troll 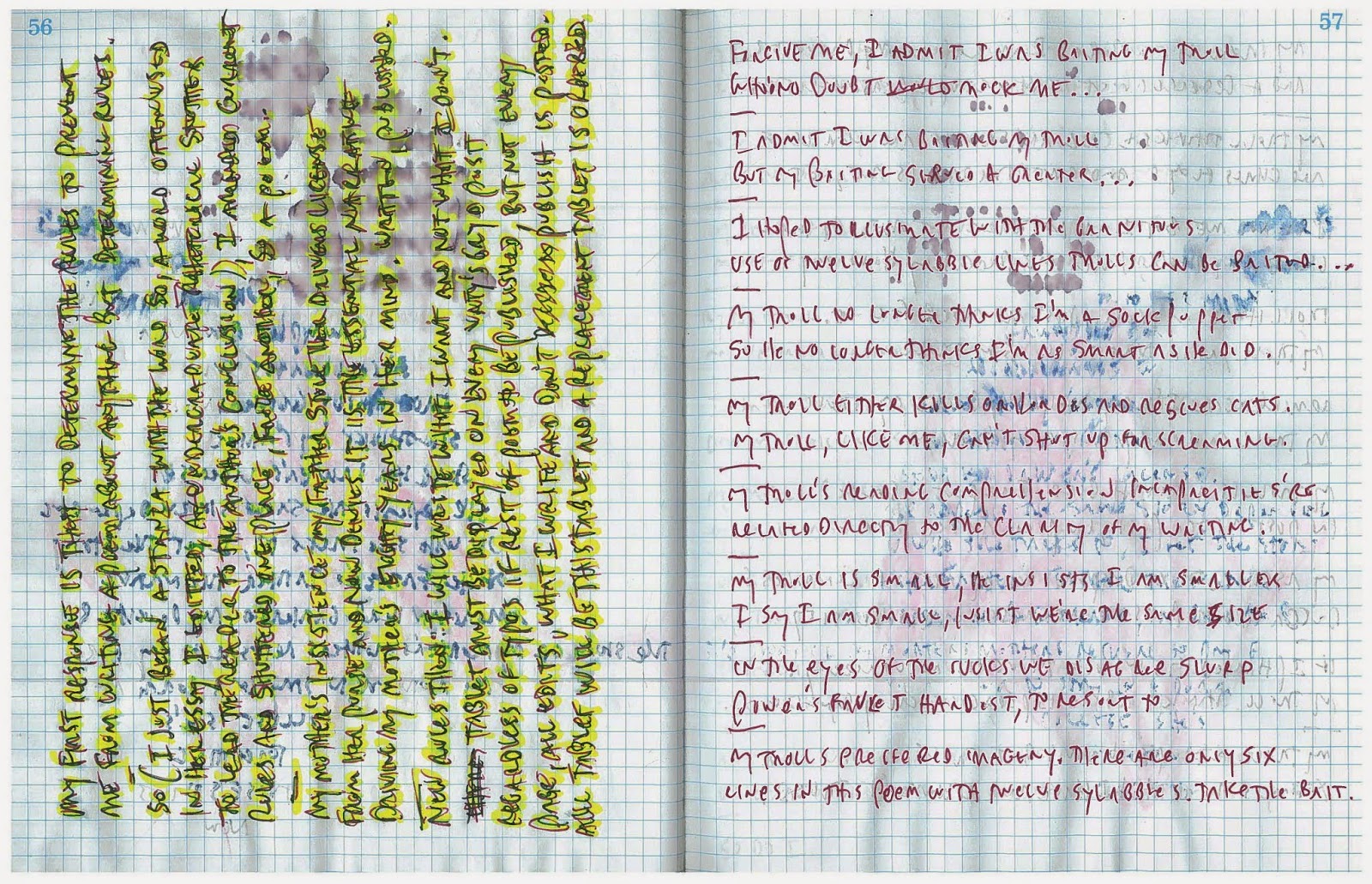 Forgive me, I admit I'm baiting my troll but my baiting serves a greater...
I hoped to show through gratuitous use of  twenty-four syllable lines how trolls can be baited
then remembered: never count beats for trolls....
My troll no longer thinks bloggers A, B, C, D are me, E, F & G my sockpuppets.
My troll no longer thinks I'm as smart as he once did.
(UPDATE! today, December 14, 2014, in a comment at Tarzie's,
my troll said that A, B, C, D, E, F, and G are me!
thank you, Doxtrot, what a wonderful compliment!)
My troll's reading comprehension inadequacies don't relate directly to the clarity of my writing.
My troll is small, insists I am smaller. OK.
My troll embodies every trait he excoriates me owning.
We once disagreed whose team sucks power's faucet hardest
(to resort to my troll's preferred homoerotic imagery).
I've conceded my shitty team sucks more.
He disagrees with my agreeing with him whose team sucks power's faucet hardest,
re: my troll's reading comprehension inadequacies.
My troll says I rape my daughter.
My troll says I'm a federal agent.
I am not me but I am them and me, says my troll. My troll
is me. My troll hates me precisely how my troll
hates my troll, just me more for mock of it.
My troll is a didactic mynah bird.
I repeat myself post after post, poem after poem.
My asshole troll despises me my acts of kindness,
calls it (I paraphrase) passive-aggressive misdirectionary assholosity.
My troll thinks verbal abuse is pedagogically beneficial.
My troll attempts hiatuses but always fails.
I threaten hiatuses but never try.
My troll attempts hiatuses but always fails.
I mailed him Gaddis, Pynchon, Harington, Elkin, countless CDs I can't recall.
My troll wrote the nicest, kindest, incredibly heartfelt comments on my blog ever.
My troll forced me to write this poem to get it neutralized by timestamp and excised by baiting.
I have doxxed myself. He doxxes me anyway.
I could but haven't and won't dox my troll.
My troll calls me Jeffy Weffy. The derision, it burns.
My troll objects to my theory I'm a poet.
My troll reads every poem I post.
My troll asserts I fuck my daughter.
It -  me and my daughter - started as rape, is now dull and unforced.
My troll says I have no daughter, am gay, my not-daughter my beard.
My troll says I rape my beard.
My troll denies he exists when challenged.
My troll won't honor his pseudonyms.
My troll hides behind anonymity when mocking others their pseudonyms.
My troll thinks this brave. My troll is weird.
Forgive me, I wonder if my troll is a miserable asshole or plays a miserable asshole or,
most likely, is a miserable asshole playing a miserable asshole.
I assume this is all still true, his daily comments and emails more same spew.
(UPDATE! see update above: still true.)
I delete unread his daily comments and emails,
he may be seeking peace and reconciliation for all I know
these past two, three years I haven't read a word he's written.
My troll will never seek peace and reconciliation.
Here's bait: it disturbs me I feel sorry for the miserable motherfucker. 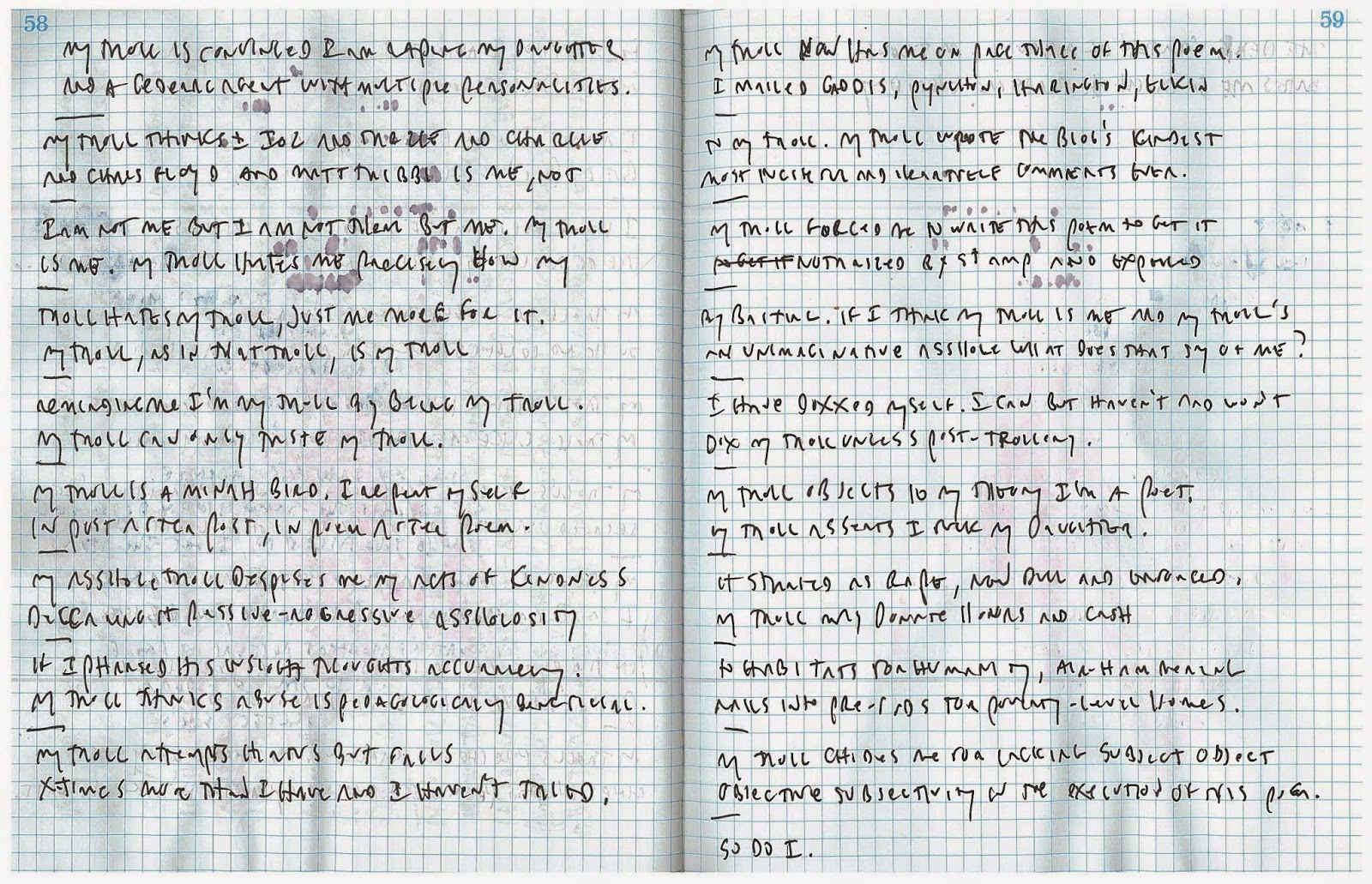