To Snack on a Tub of Roasted Grasshoppers at the Movies 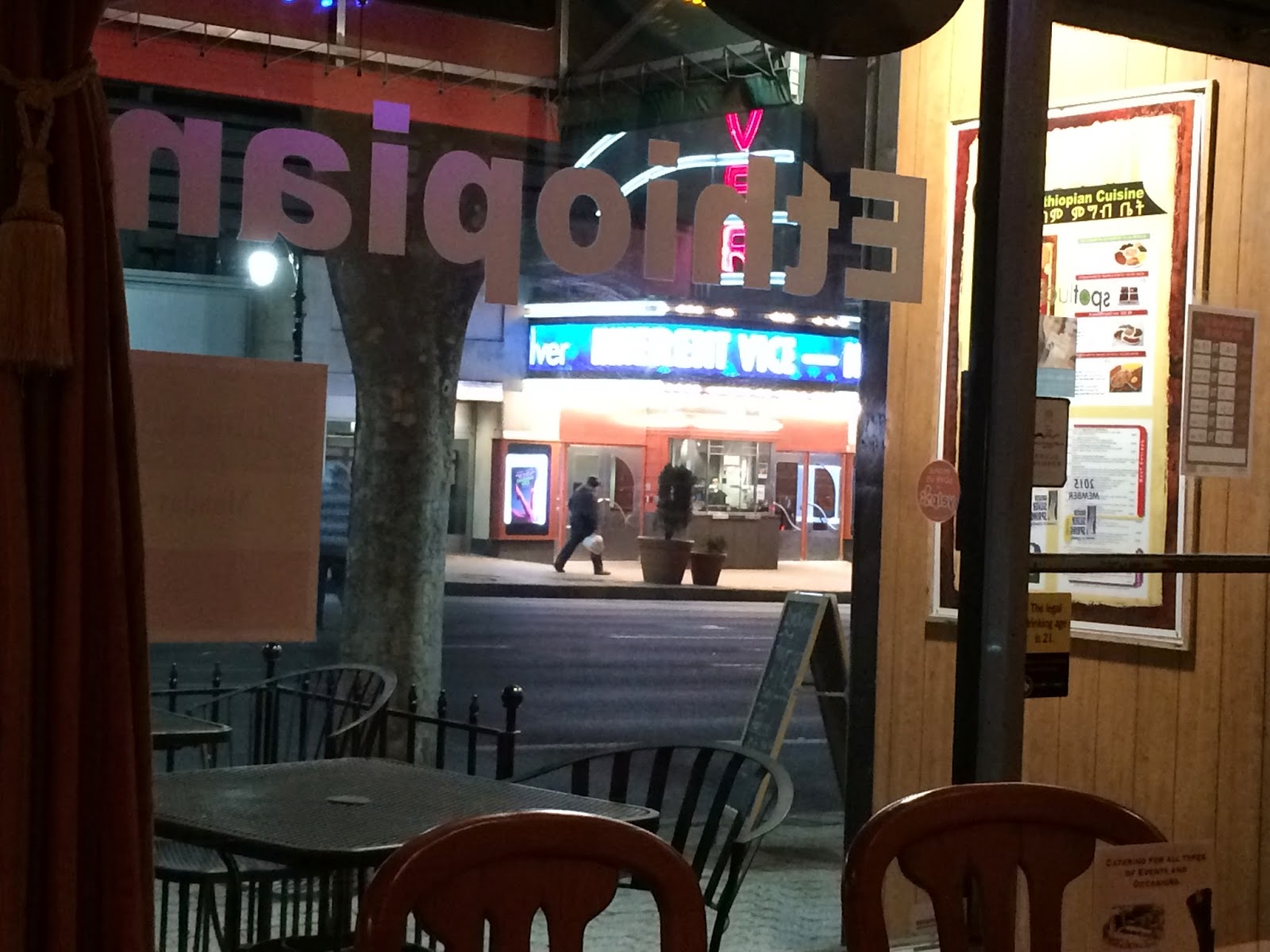 Had a date with Earthgirl last night. That's the view from a table of Abol Ethiopian Restaurant through their front window and across the street to AFI Theater in Silver Spring where we saw the movie adaptation of Pynchon's Inherent Vice. The restaurant was excellent - of all the Ethiopian restaurants in Maryland/DC we've eaten, the food as good as any but with more generous portions at the same prices. Pink pee! Earthgirl didn't care for the grilled beets, best fucking grilled beets ever, I ate them all.

Disclaimer: I don't like watching movies. I'd rather read. This is not a moral stance, just a preference. The only reason I asked Earthgirl on this particular date was out of curiosity how a Pynchon novel would translate to film. This was stupid - there has never been a movie as good as the novel it interprets, why would I think a film of a novel by one of my favorite authors would be anything but unfaithful to the novel (how could it not be, how could a film, even in a plodding two and a half hours, capture the multiple universes of even a Pynchon Light novel?) and shitty to boot (was the horrible sound production on purpose? to name just one gripe)?

I tweeted last night If you've never read Pynchon you can skip Inherent Vice. If you read and love Pynchon you should NOT see Inherent Vice and Jim tweeted this response just saw it. Wild ride, close to the novel. More for the experience than plot, char., or meaning. Contact high and Alex the Desest Ox tweeted Oh? I love Pynchon, and enjoyed the novel Inherent Vice. Avoid the film? Hmm. Go see the movie, do not let me dissuade you. Mine was a tweet upon getting home, I am not a reliable judge on movies, I was feeling dumb to be disappointed to be disappointed in an experience I knew would disappoint me. But... shitty movie.

So, confirmed: I don't like watching movies, I don't like going to theaters, a movie can never be as good as its novel, downtown Silver Spring is creepy and dangerous after dark, I like beets, I love grilled beets, we discovered a great Ethiopian restaurant, I love going on dates with Earthgirl.

“What is patriotism but love of the foods one had as a child?”*

To eat stinky food
is a sign of savagery, humility,
identification with the earth.

“It was believed that after cleaning, tripe still contained ten percent
excrement which was therefore eaten with the rest of the meal.”**

Today I’ll eat Colby cheese.
Tomorrow I’ll eat sparrows.
Chew bones, suck fat,
bite heads off, gnaw on a broken wing.
Anise-flavored beef soup smells like sweat.
A large sweaty head bent over
a large bowl of sweat soup.
A Pekinese is ideal, will feed six,
but an unscrupulous butcher
will fudge a German sheperd,
chopping it up to look like a Pekinese.

To skewer and burn meat is barbaric.
To boil, requiring a vessel, is a step up.
To microwave.

To snack on a tub of roasted grasshoppers at the movies.