Ligeti György, to honor the Hungarian (and Bajoran) naming traditions, born 92 years ago today. I find fascinating my hottest current novelist crush, Krasznahorkai László, is Hungarian, and two of my decades old and enduring musician crushes, Ligeti György and Bartók Béla are Hungarian. I am a quarter Hungarian. I don't speak Hungarian, I've never been to Hungary, what I know of Hungary's history is from my grandmother's books and magazines on the 1956 Soviet invasion (and I only looked at the photos and read captions). Still, I wonder if I'm not reading Krasznahorkai László and listening to Ligeti György and Bartók Béla with some small but tainted tribalist overrating. The same novel by a Bulgarian, the same music from Moldovans, would I rate them as highly as I do the Hungarians?

The question that got me here: of all the motivations for yesterday's Oligarch's Decision to Try FIFA for the Crimes of The Oligarchs which is the strongest? My first thought: what's more important in the move to austerity than assuring the peasants of the "integrity" of their tribal entertainments? Sepp Blatter is a lesser gangster than Lloyd Blankfein, FIFA a lesser casino-laundromat than Goldman Sachs. If, as friend Hamish Mack suggests, FIFA consists of particularly assholish Oligarchs then this could be the Blankfeins' warning to the stupidly greedy Blatters to cut the crudely greedy shit and run the tribal carnival so it seems as least plausibly legit. This is no doubt true. It also stinks of an attempt by the Oligarch's to signal they are self-policing - and they are, selectively, for ignoble reasons.

But I'm stupid re: over-estimating sports and tribalism. I think it important to the Oligarchs that when the out-of-work in Liverpool sit in their crumbling terrace housing that Blues who hate Reds and Reds who hate Blues still believe the entertainment on the field is legitimate and agitate about awarded penalties instead of empty larders. Hey, this is new: 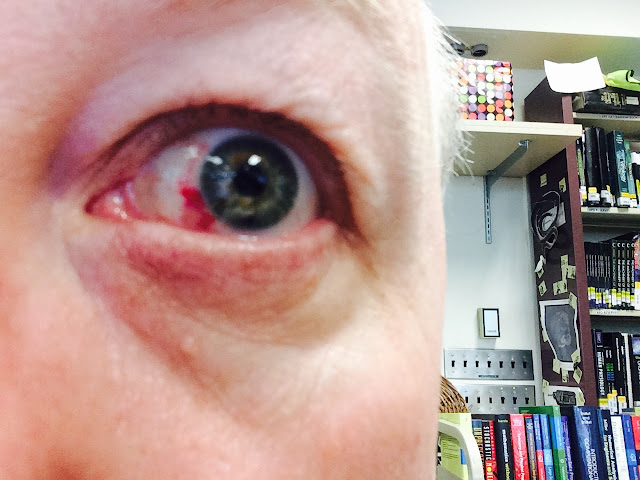 ALL THE MEMBERS OF MY TRIBE ARE LIARS

Think of a self-effacing missionary
Tending the vices of a problem tribe.
He knows the quickest cure for beri-beri
And how to take a bribe.


And so the mind will never say it’s beaten
By primitive disturbance of the liver;
Its logic will prevent its being eaten,
Get it across the river.


But faced with this assured inconsequence
That damns the very method that is used,
It leaves the heart unproselytised and hence
Admits that it’s confused.


I know I’m acting, but I still must act.
I melt to foolishness, and want it ended.
Why it continues is this simple fact:
I’d hate to end it.


For now the jungle moods assert their terms
And there’s no way to check them if they lie:
The mind attempts to solve the thing, but squirms
And knows exactly why.


The world is everything that is the case.
You cannot see it if you are inside it.
That’s why the tortoise always wins the race:
the very terms decide it.


I cannot help it if I am contented
With being discontented that I falter:
That’s why psychology was first invented
So that we needn’t alter.


It is a strange position to be in.
It would be different if I didn’t know
Why the unlikely animal should win,
Which cannibal should row.


You’d think there’d be a way of cutting out
Those self-destructive layers of introspection.
To reach the truth at last without a doubt
Of making the connection.


That’s why the missionary, on his guard,
Is wondering why the cannibal’s so merry,
And why it is so very very hard
To be a missionary.