Gray Static of a Television Screen 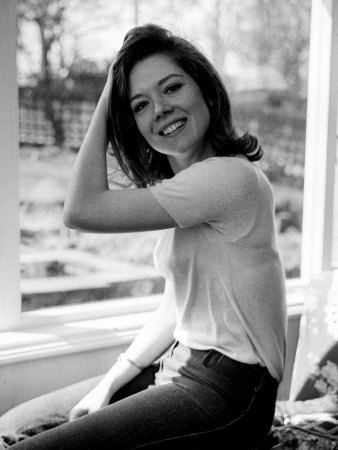 High Holy Day in Egoslavia. Diana Rigg, first, still best crush ever, is 76 today. The Avengers (yes, I know I just did Macnee's death so this is some repeating), the Honor Blackman/Katherine Gale years in b/w, the Diana Rigg/Emma Peel years, but especially the first Emma year, in b/w, first, best crush ever. Last year I was able to post some episodes, this year some company has claimed rights and blocked them, still have this:


That still gives me toe-curling waves of nostalgic pleasure like nothing else does. I haven't mentioned this here in a while: I remember seeing the Flintstones in color, the first time I'd see a color TV, I was five? six? I don't remember whose house, a relative's presumably, I know it was in western Pennsylvania, but I am convinced that seminal event, followed by a decade of TV repeats after school, home when sick or faking sick, color then B/W then B/W then color then less and less B/W as the old shows fell out of syndication, and especially the shows in syndication like Avengers and Get Smart and Bewitched whose first years were in B/W then toggled to color, influence, for good and bad, how I apprehend and interpret the world still.

CALLIGRAPHY ACCOMPANIED BY THE MOOD OF A CALM BUT DEFINITIVE SAUCE


Make your strokes thus: the horizontal:
as a cloud that slowly drifts across the horizon;
the vertical: as an ancient but strong vine stem;
the dot: a falling rock;
and learn to master the sheep leg, the tiger’s claw,
an apricot kernel, a dewdrop, the new moon,
the wave rising and falling. Do these
while holding your arm out above the paper
like the outstretched leg of a crane.
The strength of your hand
will give the stroke its bone.
But for real accomplishment, it would be well
if you would go to live solitary in a forest silence,
or beside a river flowing serenely.
It might also be useful
to look down a lonesome road,
and for the future
to stare into the gray static of a television screen,
or when lost in a video game
to accept you may never reach the final level,
where the dragon awaits, guarding the pot of gold,
and that you’ve left no footprints, not a single one,
despite all your adventures,
anyone following you could ever follow.

Email ThisBlogThis!Share to TwitterShare to FacebookShare to Pinterest
Labels: About That Ceasing Seething, Birthdays, Brazen Blogwhoring and Attention Sluttery, Egoslavian Holy Day, Fuck Me, MSADI5G, Music, My Complicity, My Inability to Shut the Fuck Up, Poem