A Voice Asks: Would You Like a Wooden Gag or a Steel Gag? 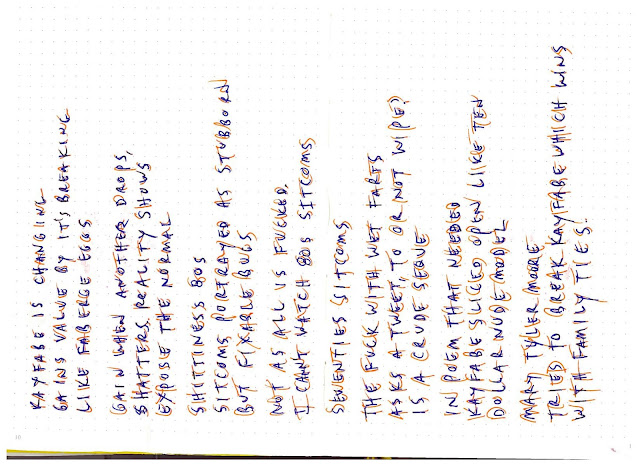 A card read: Pretend he has an eating disorder

Another card read: Pretend she has dementia

But if you insist on shoving things in my nostrils

Because my smooth muscles contract, things can slide nicely through my intestines

A voice says, Would you like a wooden gag or steel gag?

Do you prefer brandy, milk, or cabbage?

There are fingers in rubber gloves

When your bowels open, my love, when you think too much about the pharynx: this makes me feel so along

Vomit is one option          starvation is another

My love, says the authoritative body on the screen

I have a compelling interest in the weight of your frame

How many bureaucrats do we need to affirm this?

They can see an end, but it's not the right end

This is a song about a certain type of fiscal strategy

My love, says the authoritative body, you must realize that if I slice off your hand in an act of ungovernable aggression it doesn't mean I don't love you

It all depends on what you need me to say

Email ThisBlogThis!Share to TwitterShare to FacebookShare to Pinterest
Labels: About That Ceasing Seething, Beckett, Books, Borzutzky, Brazen Blogwhoring and Attention Sluttery, Dead Blegsylvania, Fuck Me, MSADI5G, Music, My Complicity, My Inability to Shut the Fuck Up, Nurse with Wound