The Renewal Project Is Doomed 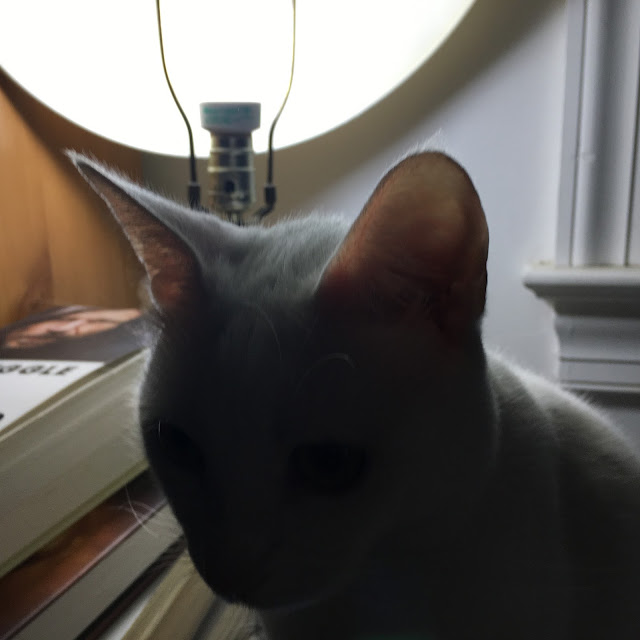 One of my Hillaryite Colleagues watched the first two nights of the GOP Convention then found me the morning after to demand my outrage match HC's re: rightwinger tribalism. I'm not watching it, I said, and I suggest you not either unless you need feed your hate. They're fucking nuts, HC said this morning. What would you have me say, I said, and continued, then stopped. Motherfucking Knausgaard, I said. What, HC said. I've the perfect photo for this post, I said, Olive's head backlit by my bed's lamp so that her face is in shadows and her head's silhouette's blackened against the bright-lit lampshade, but there's a fucking copy of fucking Knausgaard's first fucking book in his fucking struggle series on top of a book pile next to the lamp that Earthgirl put there when she was cleaning out her car and found the books she bought for me at her school's annual booksale a few months back, she says she remembered me and Hamster talking about Knausgaard at dinner or something and thoughtfully bought me a copy thinking I'd be interested. Dear reader of this post - I'm talking to you now - the above photo is not advocacy of a book I tried at least a half dozen times on the recommendation and urging of folk whose opinions I value - it sucks, sucks like a fucking Bob Dylan song sucks. And then there's the plagiarism, HC said. Brilliant move on Trump's part, I said, keeps the Media focus off the rightwing tribalists' calling for Hillary's heart be cut from her chest and shown beating to her before she dies. Fuck you, HC said.

LAWS OF THE UNIVERSE


The renewal project is doomed: because
its funding board’s vice-president resigned: because
the acids of divorce were eating day-long
at her stomach, at her thoughts: because
her husband was neglecting her, in favor of his daughter,
who was dying: because her husband,
bi and edgy, bore an AIDS sore that was ripe
enough with fear and woe to throw this whole
thick network of connections off its balance
and down a hole of human misery. Haven’t we seen it happen?
—when a crowded room at a party was tilted
perilously askew by the weight of two
wept tears that weren’t as large as a housefly’s wings,
that couldn’t have filled a pistachio shell.

It’s like this: because because because,
Sawyer was drunk when he delivered his opening remarks
onstage at Stardome Planetarium. He
stood below a slide show of “The Emptiness of Outer Space”
—stars and planets, scattered like the scantest
motes of dust in unimaginable void—and was about
to make the leap to what percent of us,
our dearly thumping bodies, is a corresponding emptiness . . .
when one foot met a wire that had strayed
outside the curtain, and a wild arc of hand undid
the podium, which canted off its casters sidelong
into the 3-D galaxy props, and you could say whatever
thimble or pustule or hackle of grief was his,
it had toppled the whole damn universe.

Was she a ghost? Sometimes she thought she was
a ghost, transparent, stealing through the lives of people
untouched and untouching. And so she carried a bucket
of burning coals (we’ll call it that for now) against
her breasts; and then she knew she was alive. And
he. . . ?—was just the rusty foxing that an antique book
exhales into dim air, wasn’t that what he was,
oh it was, yes it was, and so one afternoon he strapped
a meteorite to his back, and now he walks the streets
like anybody else. An ageless tribal saying:
If you aren’t given a burden, you must carve own.
An eye will do, if it’s ill. One word, if it’s cruel.
And don’t be fooled by breath: the throat holds up
some old-time blues the way a hod holds bricks.

But she didn’t die of full-blown AIDS
—Sawyer’s daughter. Even so, her twisted legs and limp
are enough to sometimes send him a little
over the blotto line. Tonight, though, after show time,
he’s just soused enough to wander through the mock-up
stage-set milky ways agog with child-wonder:
all those luminescent islands! all that vacuum!
Look: a planet floats, there’s that much cosmos
all around it. A planet! While we . . . we couldn’t
squint and levitate a half inch, not the guru-most
among us. Well, we could: if the laws of the universe changed.
It’s only the Earth that makes us so heavy.
It’s only our lives that keep our lives
from floating off into the nothing.

Email ThisBlogThis!Share to TwitterShare to FacebookShare to Pinterest
Labels: Aargocalyptic, Brazen Blogwhoring and Attention Sluttery, Fuck Me, Goldbarth, MSADI5G, Music, My Complicity, My Inability to Shut the Fuck Up