Saw the Diebenkorn exhibit at Baltimore Museum of Art Saturday, holy the fuck. The exhibit focused on Matisse's influence on Diebenkorn, the BMA long known for its Matisse connection/collection, so there would be a Matisse next to a Diebenkorn influenced by that particular Matisse. Let me employ the full range of my palette of language to describe art: Diebenkorn kicks Matisse's ass. Diebenkorn kicks my tines, I vibrate in front of some of them. Earthgirl and I are going back next weekend. 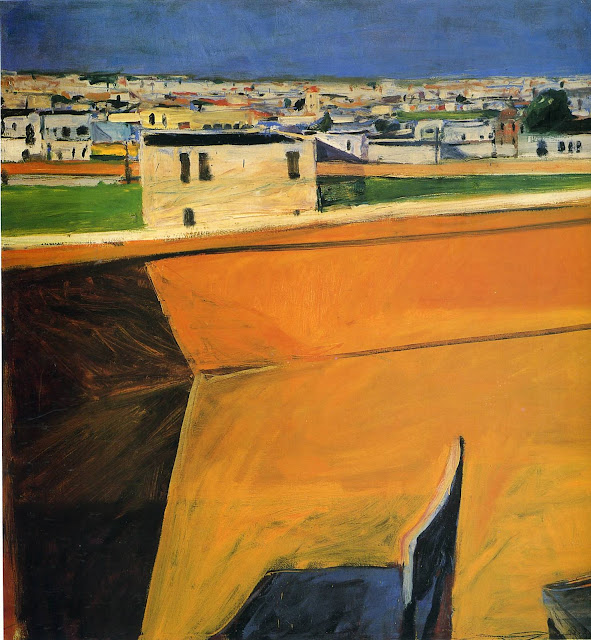 FORECLOSING ON THAT PERIL

I’ll keep explaining—because maybe you still don’t get it
Those children in California (substitute any state), dead from gunfire—
Let me begin again in a little roof garden with my friend
A perverse reader, he listens to my stories as if they were TV
I mean he mocks me lovingly on the roof and at the library book sale
My friend is not a banker but a prison activist
He used to be a philosopher, but like many philosophers, he’s taken a turn
that should be easy to understand
The trajectory from philosopher to activist is like the curve of a single brushstroke across a large canvas
Artists in the fifties paid attention to that
I hate flat language like this, but I’m pretty flat
sometimes. You have to be your own dictator
and the law is, hate yourself if you have to, but don’t stop doing the thing you said you were going to do
As I tell my daughters often
Emotion is a site of unraveling (JB)
I admit, gripping my T-shirt
I wish I were writing in prose an unfolding intensity that shocks history professors and prison activists equally
Later, in the grass, we’ll practice gymnastics and that way contribute our sweat
to Our Ephemeral City

Email ThisBlogThis!Share to TwitterShare to FacebookShare to Pinterest
Labels: Aargocalyptic, Brazen Blogwhoring and Attention Sluttery, Dead Blegsylvania, Fuck Me, MSADI5G, Music, My Complicity, My Inability to Shut the Fuck Up