I Never Said a Word About Maisie Again 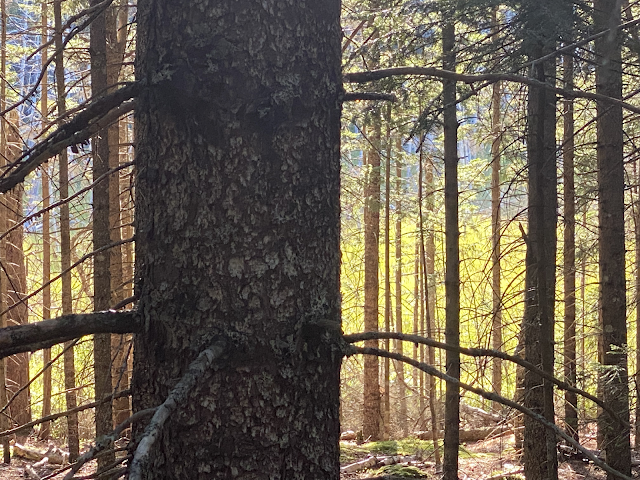 The first days in Maine of every vacation here (this our fifth and we're booked for next year, two weeks next year) we daydream of living here, by Tuesday we realize if we lived here we'd need another there and we like here as our there

I've barely read, I've hardly written, last evening the first time since last Friday I've opened a tab of Washington Post, I've done no blogroll fishing much less contemplated aggregating aargh and haven't since a week ago today when I changed linking protocols to improve the look of the grid, fuck me. I've done one tourist post with photos and one BLCKDGRD Holy Day post for Ashbery, I'm not doing one for William Gass today, here's last year's (and the year before's and the year before's), last year's had Garcia's birthday post, Jerry's birthday tomorrow, that takes care of that. I suspect tomorrow night I will load the giant Herman post and set it to publish Sunday morning when we're halfway to Portland on 95 on way home though the reread of The Fucking Whale Novel this past year will be my last, no more tortured whales for me no matter how many shitty humans die 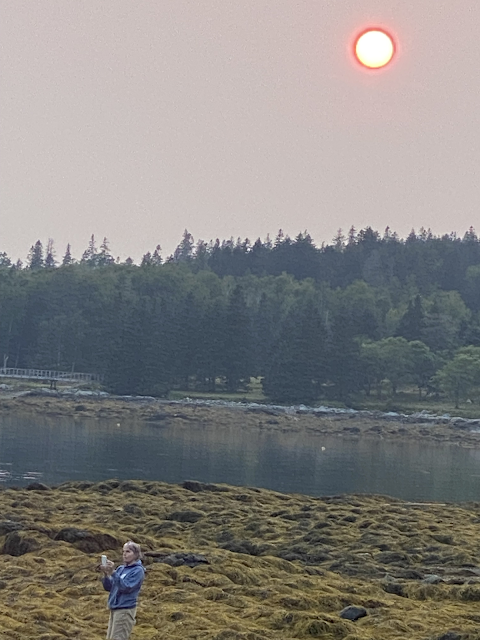 Our catsitter reports seeing Napoleon both morning and late afternoon of every day, Momcat too, and the indoor cats are said to be happy too. Work being respectful and not sending email (much) and I'm not fretting the cascade that will come this Monday (or worrying about the presentation I make on Monday to a campus-wide committee chaired by the provost on streaming media policies that I was to work on here and fuck that). A family of loons live in the lake in the backyard, parents and two chicks, the sunsets at Seal Cove have been subtle with the exception of one spectacular, we drive down at seven after I've disc golfed late afternoon at Habana's in Trenton while Lynn paints on the kayak on the lake, we've discovered gorgeous new hikes outside of Acadia, we're in bed by nine and up by six. This happiness shit sideways me. I like it, hope it never ends, can't wait for it to stop

Sixty-three today. Still one of two permanent seats on MSADI5G, I listen to her now as much as I listen to the other which is to say on birthdays only now, the debts we owe our gods are not a burden. LOTS of links, many, probably, dead, here.

CAMP OF NO RETURN

I sat in the old tree swing without swinging. My loafer had fallen off and I left it on the ground. My sister came running out of the house to tell me something. She said, "I'm going to camp tomorrow." I said, "I don't believe you." She said, "I am. It's a fact. Mother told me." We didn't speak for the rest of the day. I was mad at her for getting to do something I didn't. At dinner I asked mother what kind of camp it was. She said, "Oh, just a camp like any other." I didn't really know what that meant. The next day they got her ready to go, and then they drove off, leaving me with the neighbors. When they got back everything was normal, except I missed Maisie. And I missed her more each following day. I didn't know how much she had meant to me before. I asked my parents over and over how much longer it would be. All they said was soon. I told some kids at school how long my sister had been gone. One of them said, "She'll never be back. That's the death camp." When I got home I told my parents what that boy had said. "He doesn't know what he's talking about," my father said. But after a couple of more weeks of her absence I began to wonder. That's when they began to clean out Maisie's room. I said, "What are you doing?" You said Maise will be back soon." My mother said, "Maisie's not coming back. She likes it there better than she does here." "That's not true. I don't believe you," I said. My father gave me a look that let me know I might be next if I didn't mend my ways. I never said a word about Maisie again.

Email ThisBlogThis!Share to TwitterShare to FacebookShare to Pinterest
Labels: BLCKDGRD Holy Day, James Tate, Kate Bush, Maine 2021, MSADI5G, My Blindness, My Complicity, My Inability to Shut the Fuck Up