And What of the Stanzas We Never Sing, the Third That Mentions "No Refuge Could Save the Hireling and the Slave"

I submitted a hiring committee recommendation for a candidate who will be my direct report for an entry level paraprofessional position to the Dean of the Library who rejected it because the candidate "should want a better job than this one." The candidate has a Masters in Library Science, his applying for a janitor job in a major university library, to the Dean, disqualifying, a certain sign of the candidate's shiftlessness, lack of ambition, overall janitorialness. I said to Dean, I am the single least ambitious human in terms of satisfaction through career advancement as in where I am versus where I could have been I know, why do you think I happily stalled at Advanced Janitor for the past thirty years, my life is elsewhere. The candidate, I continued, as if anticipating this concern, mentioned his outside interests in volunteer work running a DC theater company while pursuing an amateur acting and directing (perhaps leading to professional gigs) in various theater companies in the DC area as well as expressing a passion for kayaking and whitewater rafting, he wants a forty hour week a job that pays the rent, he went to library school, wants to work in a library, does not want to be a librarian. Dean said, he should be ashamed to apply for this job and embarrassed to want to work for you, a staffer. She turned her back on me and walked out of my office. Cheapeasy shot but true: Dean's cars Biden/Harris, pink cat-earred hat, Ukrainian flag bumperstickered


Since I do need a church: Bryce, whose Friday noon Eastern show on WFMU I listen to and adore (except for the every six weeks or so raga show which I don't adore but like), bashed his uninsured head in a motorcycle accident and Station Manager Ken set up a gofund me page to help pay to fix Bryce's uninsured face, please help, I fully confess, I jones for a church of faith and song, I tithe WFMU and I tithed Bryce's bashed head, there's just a week or two left or first Spring green, yesterday at Hidden Pond, Rachel Carson 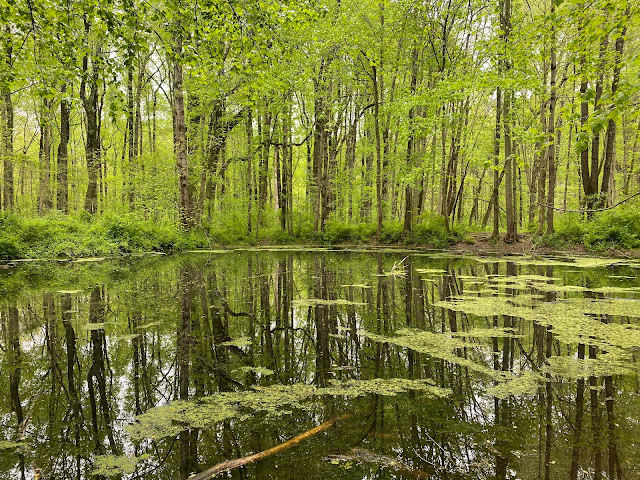 The truth is, I’ve never cared for the National
Anthem. If you think about it, it’s not a good
song. Too high for most of us with “the rockets
red glare” and then there are the bombs.
(Always, always, there is war and bombs.)
Once, I sang it at homecoming and threw
even the tenacious high school band off key.
But the song didn’t mean anything, just a call
to the field, something to get through before
the pummeling of youth. And what of the stanzas
we never sing, the third that mentions “no refuge
could save the hireling and the slave”? Perhaps,
the truth is, every song of this country
has an unsung third stanza, something brutal
snaking underneath us as we blindly sing
the high notes with a beer sloshing in the stands
hoping our team wins. Don’t get me wrong, I do
like the flag, how it undulates in the wind
like water, elemental, and best when it’s humbled,
brought to its knees, clung to by someone who
has lost everything, when it’s not a weapon,
when it flickers, when it folds up so perfectly
you can keep it until it’s needed, until you can
love it again, until the song in your mouth feels
like sustenance, a song where the notes are sung
by even the ageless woods, the short-grass plains,
the Red River Gorge, the fistful of land left
unpoisoned, that song that’s our birthright,
that’s sung in silence when it’s too hard to go on,
that sounds like someone’s rough fingers weaving
into another’s, that sounds like a match being lit
in an endless cave, the song that says my bones
are your bones, and your bones are my bones,
and isn’t that enough?
Posted by BDR at 8:32 AM