The Rearview Mirror Swam with Mirage

This year's Maine worry stones, life-size, yo, I swear by them even if I lose most of them in the course of the year, if you'd like one let me know, I'll hand it to you if I can, mail it to you if I can't, laugh, last year I gave my colleagues at work one each, each colleague underwhelmed, the stone quickly buried in a desk drawer if not slipped into a pocket and thrown away on way home 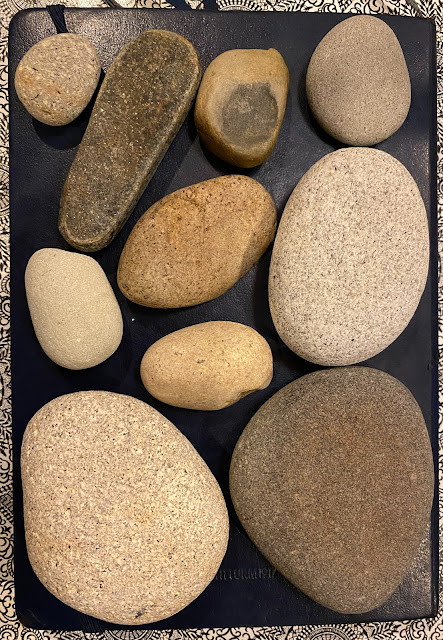 Not these two though (twice life-size), they be mine, I love the big toe, and the other chimes 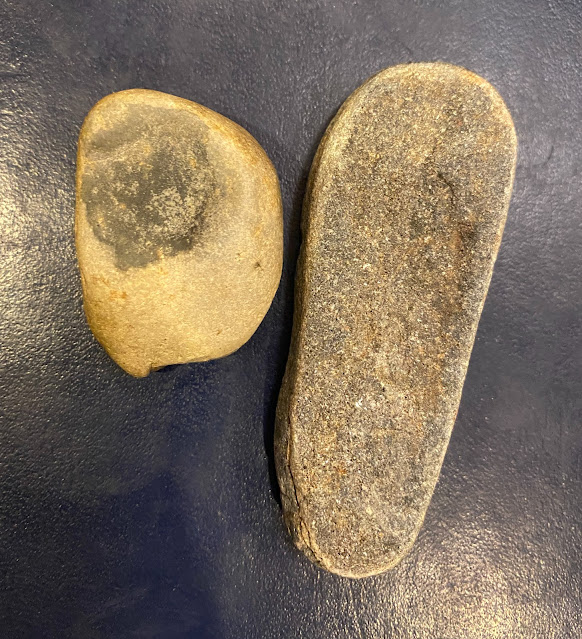 Last day today. We stop in New Hampshire tomorrow so L can visit a friend, they want time alone in the afternoon, will research disc golf courses near Hillsboro NH tonight. Tomorrow also Kate Bush's birthday, a student worker asked me earlier this month if I'd ever heard of her, her *Running Up That Hill,* made famous again because of some television show. I did not tell the student that Kate Bush is one of two charter and permanent members of My Sillyass Deserted Island Five Game nor did I tell her I never need play a Kate Bush song again since I can hear whichever one I want in my head any time I want much less tell the student I can no longer remember all the rotating bands and musicians who have occupied Seats Three thru Five and, more than that, don't know who the current Three thru Five are. Fuck me, abandoning shit left and right. There will be a Kate Bush song or two tomorrow
Haven't read a thing. Nothing. The two novels and two poetry collections in my backpack have not left the backpack. I have not used google sheets for link-farming or evernote for digital tablet once. Analog tablet, used mostly while L painted for two hours on each of our hikes, filled, some of what's been typed here the last two weeks started in tablet and written in ink. The death of Napoleon eliminated *that* anxiety on vacation and the retirement of Bookkeeper eliminated *that* anxiety from my life, I had no idea how much those anxieties' cessation, especially the latter, opened vast new spaces for new anxieties or, rather anxieties that were entertainment are now like gigantic GMC pick-up trucks with Maine plates and bumperstickers that say *I'm Not on Vacation, I Live here* driven by bearded white males approaching in the rear view mirror that pass me then dramatically slow beneath the speed limit and dare me to react facially, I can watch the white guy watching me in his rear view mirror. Do you need me to tell you how deeply, hopelessly, irreversibly fucked this trip has made me realize we are? I've pages of hand-written notes. The disc golf has been good, almost had my first ace, bounced out of the chains on hole seventeen at Habana, and there's an excellent organic craft cannabis store in Bangor. I can't wait to be home. I'm pretty sure Lambchop has held one of the three rotation seats in MSADI5G at least once

WHAT GRIEVING WAS
Lynn Emanuel

That was not the summer of aspic
and cold veal. It was so hot
the car seat stung my thighs
and the rearview mirror swam
with mirage. In the back seat
the leather grip was noosed by twine.
We were not poor but we had
the troubles of the poor.
She who had been that soft snore
beside the Nytol, open-mouthed,
was gone, somewhere, somewhere
there was a bay, there was a boat,
there was a scold in mother’s mouth.
What I remember best
is the way everything came and went
in the window of my brief attention.
At the wake I was beguiled
by the chromium yellow lemon pies.
The grandfather clock’s pendant
of unaffordable gold told the quarter hour.
The hearse rolled forward over the O’s
of its own surprise.
Posted by BDR at 9:08 AM

Email ThisBlogThis!Share to TwitterShare to FacebookShare to Pinterest
Labels: Autoblogography, Brazen Blogwhoring and Attention Sluttery, Dead Blegsylvania, Futility, Maine2022, My Blindness, My Complicity, My Inability to Shut the Fuck Up