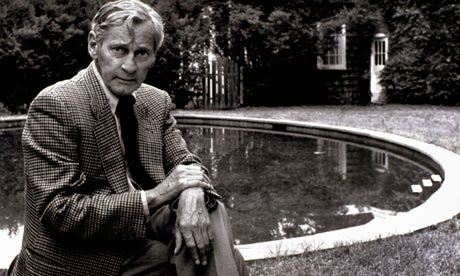 "Even though I should have known from The Recognitions that the world was not waiting breathlessly for my message, that it already knew, and was quite happy to live with all these false values, I’d always been intrigued by the charade of the so-called free market, so-called free enterprise system, the stock market conceived of as what was called a “people’s capitalism” where you “owned a part of the company” and so forth. All of which is true; you own shares in a company, so you literally do own part of the assets. But if you own a hundred shares out of six or sixty or six hundred million, you’re not going to influence things very much. Also, the fact that people buy securities—the very word in this context is comic—not because they are excited by the product—often you don’t know what the company makes—but simply for profit: The stock looks good and you buy it. The moment it looks bad you sell it. What had actually happened in the company is not your concern. In many ways I thought . . . the childishness of all this. Because JR himself, which is why he is eleven years old, is motivated only by good-natured greed. JR was, in other words, to be a commentary on this free enterprise system running out of control. Looking around us now with a two-trillion-dollar federal deficit and billions of private debt and the banks, the farms, basic industry all in serious trouble, it seems to have been rather prophetic."

- Gaddis, Frolic of His Own

Gaddis' centennial needs remarking, his novels deserve rereading, I reread *JR* this year (some of it by audio book to and from Maine this past summer), *Frolic* the goal for 2023

Email ThisBlogThis!Share to TwitterShare to FacebookShare to Pinterest
Labels: BLCKDGRD Holy Day, Brazen Blogwhoring and Attention Sluttery, Gaddis, My Blindness, My Complicity, My Inability to Shut the Fuck Up