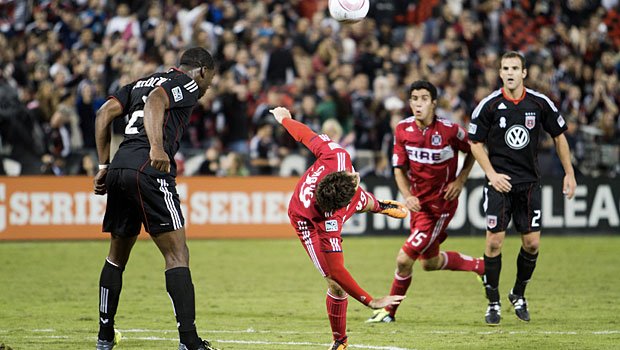 Wasn't there, didn't see in live on PC, was in Bamgier when game started, was driving to Zanesville (later than planned after being pulled over and given a warning for speeding by Knox County sheriffs) when game ended, just watched the highlights at seven this morning, and yes, the winning goal was offsides, and GOOD! the motherfuckers deserved it. Here's DeRossario calling out Clyde Simms on the tying goal:

“This has been our season in a nutshell, right? Giving up bad goals at bad times. I just would like to have seen someone take [Grazzini’s shot] in the face or the body instead of jumping and turning their back on top of the box, especially 90 minutes we’re up, the momentum, the fans on our side. You take it for your team. … It’s just too easy. We can’t keep doing that to ourselves. We’re too good of a team. We can’t keep depending on scoring and getting scored on and then trying to score again. It just doesn’t work that way. Guys should be learning, but it’s frustrating because every game it’s the same tale.”

Guys should be learning? Simms is 65 in soccer years, learning? And do watch that first goal again. Take it in the nuts if you have to, motherfucker. Here's hoping Montreal takes Simms in the expansion draft (though I can't come up with eleven players on yesterday's roster worth protecting, can you?)

“I’m physically fine. I can only do so much with the time I have. I’m a guy that expects to play 90 minutes. I’m fit. I’m healthy. It’s disappointing when you want to get the playing time to help the team win, and you only get 20, 15 minutes. I’ve done all I can do. I come in and bring energy to the game, change the game. I thought I did a good job. But I’m not getting a lot of time to go out there and really help the team.”

That's cause you suck, you diving no talent poacher.