Shelby Refuses to Choose between Blue and Green on Principle 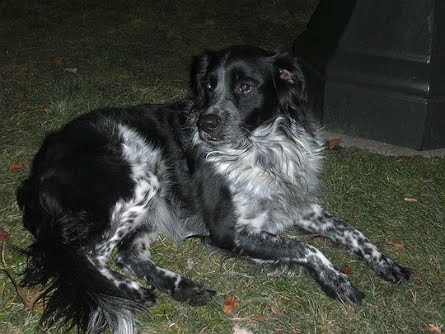 
In response to Denver Mayor Michael Hancock’s insistence that Occupy Denver choose leadership to deal with City and State officials, and drawing inspiration from the notion that corporations are people, Occupy Denver’s General Assembly has elected a leader: Shelby, a three year old Border Collie. “Shelby is closer to a person than any corporation: She can bleed, she can breed, and she can show emotion. Either Shelby is a person, or corporations aren’t people,” said a Shelby supporter at the time of her election.

Occupy Denver reserves the right to alter leadership status, but for now, Shelby exhibits heart, warmth, and an appreciation for the group over personal ambition that Occupy Denver members feel are sorely lacking in the leaders some of them have voted for on national, state, and local levels. Accordingly, Occupy Denver looks forward to communication with Mayor Hancock and Colorado Governor John Hickenlooper sometime this week to introduce their leadership.

Newly-elected leader Shelby will be leading this Saturday’s Occupy Denver march against Corporate Personhood, and invites all other civic minded dogs (and their leash-holders) to join.

I overheard two Chicago School-trained econ profs in a queue in front of me in the Union two hours ago bitching furiously and sneeringly about Occupy in general and Occupiers voting for the, ahem, bitch in particular, and fuck their dark hearts, it's completely incomprehensible to them, Occupy simply doesn't compute in their Corporate training for one-way, zero-sum negotiation.

Also four people say they like the green, two say the blue, another says to stop wanking (and I anticipate more), so here, a tried and proven bleggalgazing gimmick!

Fuck it, I'll keep it for a green for another day and might play with a header image or not, the true point of this post (beyond my assclownish self-absorption) is that Ken put the song below in my head this morning and it's not left yet and it needs to be in yours too. You're welcome.