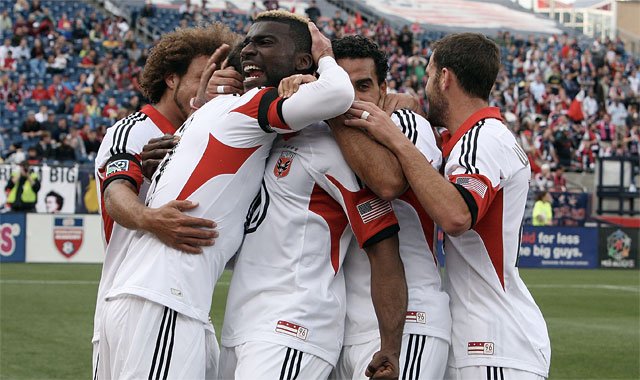 Josh Wolff? Josh Wolff? I emailed in derision, but here's the thing: United's need to substitute in a Josh Wolff type striker, who can hold the ball with his back to the goal then make the key pass that sets up a runner (which, so far, neither Salihi or Santos can), which was the offense Ben Olsen played in and is the offense he seems determined to coach, means the team needs a better Josh Wolff for the simple fact he's not the Josh Wolff he once was. I keep saying put DeRossario there, but here's the thing: DeRossario's not a ten but he's the best ten they have. Anyone not think the decision on Boskovic has been made? He either can't play or United's still not sure and won't risk any more money or Boskovic has made it into Benny's Doghouse of Work Rate and will never get the chance to see if he can play or all of the above but number three most. Ding. July 15 is three months from today, injuries may force United to use Boskovic and who knows, but I'm guessing we won't know who United's second half of the season ten and/or better withdrawn forward is until after the summer transfer window.

Out of Benny's Doghouse of Work Rate, Cruz and Santos, here's Benny's game plan: both are dirty, both have exceptional work rates, so have each outwork and whenever possible cheap shot the defenders in their zone until they're softened and slowed and then Benny introduces the players who are better at offense but won't play defense. This is not a complaint. I am curious what Benny had planned with the third substitute before Jakovic's injury forced a Korb. Was that Branko's? Najar's?

Three road points ahead of a run of home games, starting this Wednesday against expansion Montreal and a marquee game (as much as MLS can have a marquee game) next Sunday vs Metros. I feel a need to complain more (and thank you, Ningland defender Stephen McCarthy, the only man in the universe who didn't know Pontius was going to go right) but a bigger need to squash that urge and enjoy the three points, so OK. Here's a more positive than me Fullback, a happier than me Martin, and here's Goff's match report. More later if, but I doubt there's any more.
Posted by BDR at 9:04 AM