Or Faith, Strange to Feel in That Zoo of Manners 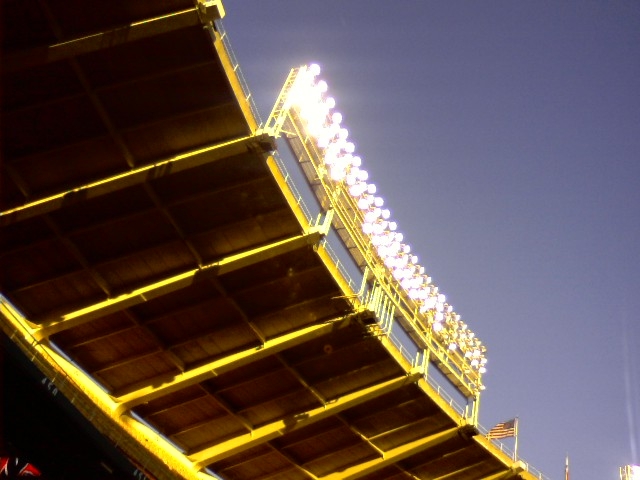 Hey! Did you know Washington DC has a professional soccer team? It's true! and they have a home game tonight against Montreal Impact, an expansion team that, of the entire palette of colors visible by the human eye, chose to wear Wigan blue. I can't imagine there will be a less attended league home game this year, April, midweek. Buzz that Branko and Najar and Pontius start so they can be benched this coming Sunday v Metros for those rested tonight. I'm very curious to see how St Benny of Olsen manages this game, a game we've - yes? - pocketed the three points? I may have an extra ticket as SeatSix has already signaled he will most likely honor his tradition of never attending weeknight games.

A few hours after Des Moines
the toilet overflowed.
This wasn't the adventure it sounds.

I sat with a man whose tattoos
weighed more than I did.
He played Hendrix on mouth guitar.
His Electric Ladyland lips
weren't fast enough
and if pitch and melody
are the rudiments of music,
this was just
memory, a body nostalgic
for the touch of adored sound.

Hope's a smaller thing on a bus.

You hope a forgotten smoke consorts
with lint in the pocket of last
resort to be upwind
of the human condition, that the baby
sleeps
and when this never happens,
that she cries
with the lullaby meter of the sea.

We were swallowed by rhythm.
The ultra blond
who removed her wig and applied
fresh loops of duct tape
to her skull,
her companion who held a mirror
and popped his dentures
in and out of place,
the boy who cut stuffing
from the seat where his mother
should have been—
there was a little more sleep
in our thoughts,
it was easier to yield.

To what, exactly—
the suspicion that what we watch
watches back,
cornfields that stare at our hands,
downtowns
that hold us in their windows
through the night?

Or faith, strange to feel
in that zoo of manners.

I had drool on my shirt and breath
of the undead, a guy
dropped empty Buds on the floor
like gravity was born
to provide this service,
we were white and black trash
who'd come
in an outhouse on wheels and still

some had grown—
in touching the spirited shirts
on clotheslines,
after watching a sky of starlings
flow like cursive
over wheat—back into creatures
capable of a wish.

As we entered Arizona
I thought I smelled the ocean,
liked the lie of this
and closed my eyes
as shadows
puppeted against my lids.

We brought our failures with us,
their taste, their smell.
But the kid
who threw up in the back
pushed to the window anyway,
opened it
and let the wind clean his face,
screamed something
I couldn't make out
but agreed with
in shape, a sound I recognized
as everything I'd come so far
to give away.