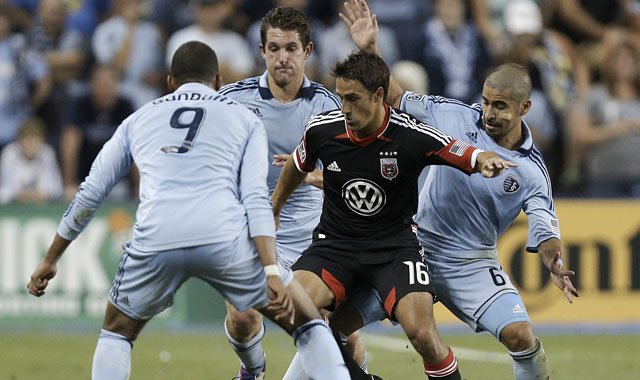 Worrisome if not distressing. Minus DeRossario, minus Woolard (replaced by some journeyman with two workouts with the club) against arguably one of the top three clubs in MLS, on the road (in a tremendous venue), and the result was predictable, including the admission that the score wasn't as close as the game. That's not what was worrisome. Any result would have been a surprise.

Here's what: it looked like Kansas City was playing eleven on five. There were three Kansas City players swarming any United player on the ball, no United players on any Kansas City player on the ball until the ball was within 25 yards of United's goal. Shatzer thinks this a tactical deficiency on Olsen's part, and yes, sure, but I wonder how much of it is United's lack of athleticism versus Kansas City's. Man for man, Kansas City was bigger, stronger, faster. They swarmed because they could. United panicked on the ball because they had too. Here's what's worrisome: United looked like the proverbial minnow good teams dispose of handily by brute routine effort.


Here's Goff. Here's Webb. Life is busy for Fullback. All best to him and his. More later, or not.

UPDATE! Here's Landru's game analysis and retort to this post. We agree about Kitchen. Counter-retorts, no, I'm off to test-drive a Honda Fit w/Planet. She's never - never - given me a reason to say no, but dang, how come she gets a new car?
Posted by BDR at 9:23 AM