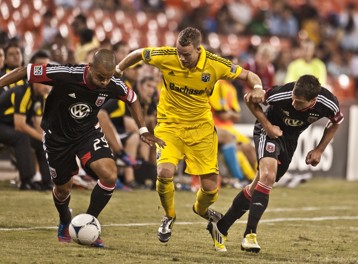 So yay and all, but something is off-key if not outright wrong (though in fairness everything everywhere is off-key if not outright wrong so it might just be me). DeRossario seems extra slow, extra petulant, extra divey, doesn't play nice with Boskovic. See, it is me. Maybe DeRossario doesn't like playing withdrawn, maybe it's mileage and lingering knocks and not his head, but it's been games since he even flashed more than one or two hints of the dominating player he's been (and who he has to be for United to make a run).

Dudar's best game for United, good game for McDonald too (whom I'm told I rag too much on), steady game from Korb (who's a minor revelation), poor game, first in a while, for Woolard who was surely concussed and now gone for games. Jakovic on the left defensive line? Oh shit. Najar will be back from the stupidass Olympics for next Saturday's important game at Kansas City; suppose he'll start left back if Woolard is eskandarianed. Salihi has been frankonealed.