If you type Hilary Mantel into the search box at the top left corner of this blog (or the search box bottom right blogroll at the prior home of this blog - both the excerpt and fairy tale below were first posted there in 2007) you can find my years of yodeling about her novels.Yesterday Mantel won a second Booker for the second of her incredibly excellent Cromwell trilogy (she won her first for the first), so rather than yodel her praises again (except to add that yes, there are always phantoms in her fiction - read Beyond Black - and yes, the dead are real in her fiction) here's an excerpt from A Place of Greater Safety:


The last thing you need is encouragement, he thought, you make trouble because you can't do anything else, you like to think of the destruction outside because of the destruction inside you. He turned his head to the door, where outside the city lay. There are a million people, he thought, of whose opinions I know nothing. There were people hasty and rash, people unprincipled, people mechanical calculating and nice. There were people who interpreted Hebrew and people who could not count, babies turning fish-like in the warmth of the womb and ancient women defying time whose paint congealed and ran after midnight, showing first the wrinkled skin dying and then the yellow and gleaming bone. Nuns in serge. Annette Duplessis enduring Camille. Prisoners at the Bastille, crying to be free. People deformed and people only disfigured, abandoned children sucking their thin milk of duty: crying to be taken in. There were courtiers: the was Herault, dealing Antoinette a losing hand. There were prostitutes. There were wig makers and clerks, freed slaves shivering in the squares, the men who took the tolls at the customs posts in the walls of Paris. There were men who had been gravediggers man and boy all their working lives. Whose thoughts ran to an alien current. Of whom nothing was known and nothing could be known. He looked across at Fabre. "My greatest work is yet to come," Fabre said. He sketched its dimensions in the air. Some confidence trick, d'Anton thought. Fabre was a ready man, wound up like a clockwork toy, and Camille watched him like a child who had been given an unexpected present. The weight of the old world is stifling, and trying to shovel its weight off your life is tiring just to think about. The constant shuttling of opinions is tiring, and the shuffling of papers across desks, the chopping of logic and the trimming of attitudes. There must, somewhere, be a simpler, more violent world.

A fairy tale by Mantel, plus news of Momcat, links, music, new Stephen Dunn poem below the fold:


In the days when all the priests were dead, and most people walked around with their heads tucked under their arms for safety's sake, there was a princess for whom nothing was ever good enough. You will want to know what she was called, but this she did not know herself; given her choice from Names A-Z, she had got up to R and torn the book apart with her teeth. She lived in a palace with a totally unsatisfactory view of mountains, glaciers, foaming seas and long beaches of white sand, and when she looked out at this dull vista, her dissatisfaction was so great that it misted the glass, and the whole world outside the palace was obscured from view.

The princess's parents had disappointed her, and so, long ago, they had been taken apart and put in basement storage. Sometimes, as a girl, she had built herself a friend from a kit, a docile flatterer who lost every game that they played, but she never looked the princess in the face or spoke her name, and the princess said, "She is not good enough for me."

When the princess came to the age to fall in love, she ordered hand-built suitors from the land's best workshops. The craftswomen saw a rich future for themselves and their children, if only they could turn out a young man who was good enough for the princess, so they did not scruple to hunt down living youths who were possessed of fine heads of hair, manly chests, gleaming teeth, sturdy legs, and other enviable features I am too delicate to mention. In place of the features they coveted, they left behind wispy comb-overs, bony concavities, ill-fitting dentures, spindleshanks and tiny organs that looked like the novelty whistles people used to find in Christmas crackers, before Christmas was forgotten.

The young men would have counted it an honour to form any part of the final product that might catch the princess's eye. But when the suitors, assembled, oiled and varnished, were wheeled before the princess, she waltzed up and down the line with an expression of disdain, and said, "These are not good enough for me."

Fetch me clever men, she said, well-struck in years, men with grizzled brows and viper tongues. So they brought in Shakespeare, Socrates and Sherlock Holmes, and she said, "These men are not smart enough for me."

She called for heroes, and so they brought in Achilles and a bunch of slaughtered warriors he was kicking his heels with, and she said, "These men are not brave enough for me."

When she asked for music, they went out into the badlands and caught human souls in nets, and brought them back to sing for her, but they didn't sing any song she knew. She bottled them humming in glass jars, and trapped them under those net tents you use to keep the flies off cakes, and the snared souls improvised all the melodies ever made by the wind in the trees or the breeze sighing through sedges, but the princess shrugged and said, "These souls are all very well, but they don't know me from Adam. They may be singing, but I do not think they are singing to me."

You will want to know what the princess looked like, and I can tell you only that this varied from day to day. Sometimes she looked like Helen of Troy and sometimes like Cleopatra, depending which head she called for when she woke in the morning. No wonder the bottled souls failed to recognise her. And she had trouble knowing herself, as none of the mirrors in the palace was good enough. They hung them picture and landscape, they lit them up and lit them down, they tinted them and silvered them, and sometimes they sneaked up on her with wing-mirrors and make-up mirrors, but still she said, "These are not good enough for me."

They flashed up at her surfaces of polished onyx and pewter, they brought magnifying mirrors and diminishing mirrors, but the princess stared at what she saw there with incomprehension and dislike. She said, "I don't know who that is, but it doesn't seem to be me."

One enterprising slave sent to Versailles to have the Hall of Mirrors taken apart, shipped overnight and assembled next day by image consultants. But the princess spat at what she saw, and shattered the nearest pane with the toe of her reinforced glass slipper.

And so her pointless life went on. Year after year. More years than I can tell; for the princess, bored with the calendar, often crossed out the name of the year or added a few months to it, as the whim took her. Till one day, aged 50, 60 or not inconceivably 70, wandering the thousand rooms of her too-small palace, unlocking all the many cupboards to see if there were presents in them, the princess came to a little cupboard she had never seen before. First she rapped on it and cried, "Present, open up!" When she got no answer, she ran her fingers around the door frame, and pressed the hinges, looking for secret springs. Finally, she took her master key from her pocket; the clothes of princesses, unlike the clothes of ordinary women, come with pockets. She snapped the key into the lock; she swung open the door; she opened it to the light, and cowering at the back of the cupboard she saw a squalid little object, which immediately rolled out and fell on her feet. Note I say on them, not at them.

"Hello!" said the princess. "What can this be?"

Before she could hurl it out of the casement, the creature uncurled itself; belly up, it showed her a dull sheeny surface, in which she glimpsed someone she had never seen before: lopsided, snaggletoothed, grey-haired, droop-jowled, puffy-eyed and sad. The princess gazed at herself in wonder. "You'll do," she said.

I cannot say that they all lived happily ever after. In a country where people walk around with their heads under their arms, is that likely? But I can say that, having found her soul in a cupboard, and having recognised herself at last, the princess prepared for a happy death. As I do, and so I hope do you, and so I hope do we all. Amen. 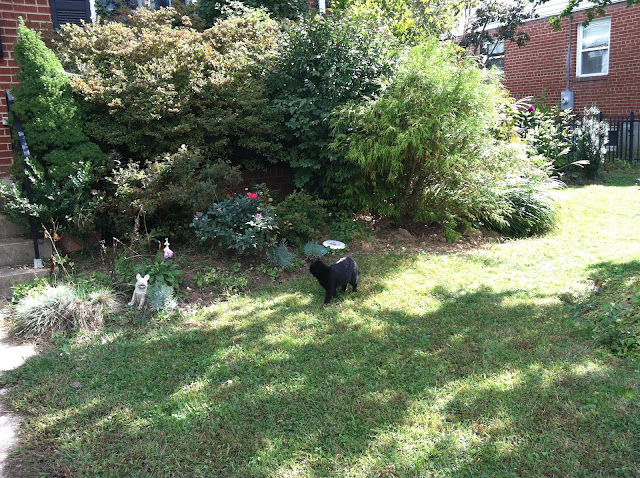 Sometimes when the obvious is out there
battling to get past its lightweight reputation
and offer us what it conceals,

little apertures appear, invite the eye.
A man can see his wife readying herself
to say good-bye; another sees himself

hiding behind his photographs
of achievements, a tiny replica of a man
up on the mantel with his victories.

Of course, others have noticed these things
for months, years. But how nice, sometimes,
not to see the storm coming and blithely walk

into it singing. How nice when we survive
our blindness, our stupidities,
and manage to get rewarded.

Yet the obvious is dangerously everywhere,
part of the daily mask and facade.
Sometimes it stares back at us, in disbelief

that we haven't seen that rose or AK-47.
Sometimes it just taps us on the shoulder,
revealing what only to us is a revelation.