If I Were the Type Who Made Promises I'd Probably Begin by Saying: America, Relax! 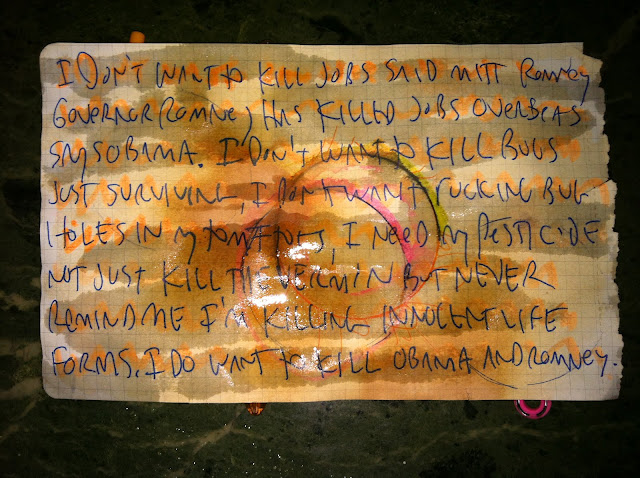 Wrote that in a hotel room in Mt Vernon Ohio Tuesday night, didn't watch the debate of course, did I get it right? I hear Obamalame wussied, missed a chance to articulate progressive positions contra Romney's Conservative assholosity, Obamalame constantly remarking as much on the two's similarities as their differences. This: The reason Obama did poorly is simple. He is bad at governing America. He hasn’t solved the foreclosure crisis, the jobs crisis, the climate crisis, the energy crisis, the financial crisis, the debt crisis, the health care crisis, or really, anything.  He can’t point to very much that Americans broadly like, except killing Bin Laden and the auto bailout. His second term agenda is to cut Social Security, Medicare, frack, cut corporate taxes, bust more teachers unions and pass more neoliberal trade agreements. He is proud of this record. So are his people. But he knows he can’t run on it because it’s unpopular, so instead, he presented himself as a nice likeable guy. Heh, I hear that Romney shifted hard left and lied through his teeth. To put it charitably, the complaint I'm hearing is that Obamalame didn't shift hard left and lie through his teeth (see Pierce quote below about Obamalame's naivete), that he represented himself honestly as the moderately conservative Republican he is. Vote Obamalame, the more honorable moderately conservative Republican. Holyfuck, fine ironies, fine metaphors abound. I am determined to enjoy the next five weeks as much as I'm capable.

I can promise you this: food in the White House
will change! No more granola, only fried eggs
flipped the way we like them. And ham ham ham!
Americans need ham! Nothing airy like debate for me!
Pigs will become the new symbol of glee,
displacing smiley faces and "Have A Nice Day."
Car bumpers are my billboards, billboards my movie screens.
Nothing I can say can be used against me.
My life flashes in front of my face daily.
Here's a snapshot of me as a baby. Then
marrying. My kids drink all their milk which helps the dairy industry.
A vote for me is not only a pat on the back for America!
A vote for me, my fellow Americans, is a vote for everyone like me!
If I were the type who made promises
I'd probably begin by saying: America,
relax! Buy big cars and tease your hair
as high as the Empire State Building.
Inch by inch, we're buying the world's sorrow.
Yeah, the world's sorrow, that's it!
The other side will have a lot to say about pork
but don't believe it! Their graphs are sloppy coloring books.
We're just fine—look at the way
everyone wants to speak English and live here!
Whatever you think of borders,
I am the only candidate to canoe over Niagara Falls
and live to photograph the Canadian side.
I'm the only Julliard graduate—
I will exhale beauty all across this great land
of pork rinds and gas stations and scientists working for cures,
of satellite dishes over Sparky's Bar & Grill, the ease
of breakfast in the mornings, quiet peace of sleep at night.