The Slice of American Cheese on the Drive-Thru-Window Is Also Gold, Bathetically Gold, and I Go Where My Hunger Dictates 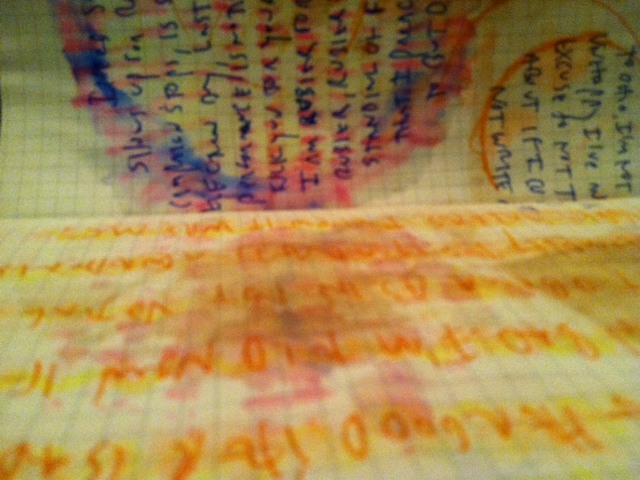 Apologies but not full apologies for my spontaneous and surprisingly delighted but obnoxiously snarky burst of joy at Obamabomb. I don't apologize for my delight at one more obamapostasy: even when I was a loyal Democrat I credited Obama's success on his game-player's skills not his progressive credentials: I knew he'd suck in governance but I simply couldn't conceive how much he'd suck at gameplaying. And odds are good Wednesday's debate was a once-off performance of extraordinary circumstances, Obama's autobiography released in 2018 to coordinate with the Obama Presidential Library will reveal Obama's appendectomy only two hours before the debate. Maybe he was rope-a-doping knowing there are two debates still plus countless news cycles, maybe he was afraid that a coordinated Team Republican plan to release crackers Tuesday and a lying-filthy Romney Wednesday was meant to goad him into Angry Black Man, maybe Obama does say fuck this shit, I want to golf in Hawaii, maybe Corporate has decided fuck this Democratic sapper shit, go get the money that doesn't exist now before the money that doesn't exist doesn't exist more than it already doesn't exist, but Obama's game-playing? Sucked unto conspiracies. Well jeebusfuck people, you have an appendectomy two hours before a presidential debate - at altitude! - and you respond sharply, decisively, crisply, definitively, with concision and rapier wit, with a forceful and passionate defense of and advocacy for a visionary progressive argument to righteously counter the cardboard liar's 1% cardboard lies. In any case, I'm still obnoxiously and snarkily happy Team Democrat's political Kommisars are freaking out.


PHOTOGRAPHS OF THE INTERIORS OF DICTATORS' HOUSES

It's as if every demon from hell with aspirations

spouted gouts of molten gold, that cooled down

A chandelier the size of a planetarium dome

is gold, and the commodes. The handrails

heading to the wine cellar and the shelving for the DVDs

and the base for the five stuffed tigers posed in a fighting phalanx:

gold, as is the samovar and the overripe harp

and the framework for the crocodile-hide ottoman and settee.

of hundreds for the screening of home (or possibly

from vaulted ceiling to clawfoot legs on the seating.

Of course the scepter is gold, but the horns

on the mounted stag heads: do they need to be gilded?

Yes. And the olive fork and the French maid's row of dainty buttons

and the smokestack on the miniature train

that delivers golden trays of dessert from the kitchen

to a dining hall about the size of a zip code,

and the snooker table's sheathing, and the hat rack,

and those hooziewhatsit things in which you slip your feet

on the water skis, and the secret lever

that opens the door to the secret emergency bunker.

Smug and snarky as we are, in our sophisticated

and subtler, non-tyrannical tastes, it's still

unsettling to realize these photographs are also full

of the childrens' pictures set on a desk,

the wife's diploma proudly on a wall, the common

plastic container of aspirin, and the bassinette

with the scroll of linen shade at the ready

in case the sun is too powerful: reminders of how

a graduated continuum connects these überoperatically

fat interior lives to our own. We all desire

to the family name, and Faulkner adds the "u," in quest

of a signified gentility. My friend Damien

at the stellar after-ceremony party, in the swank hotel's

and in under an hour his own swank room could boast

the golden statuette, the evening's loveliest woman, and

and if you think this story's moral lesson is

that satiation is ever attained, you don't understand

the protoknowledge we're born with, coded into our cells:

soon soon soon enough we die. Even before we've seen

the breast, we're crying to the world that we want;

and the world doles out its milkiness in doses. We

that's what we want; abstemiousness is only

hunger translated into another language. Yes

there's pain and heartsore rue and suffering, but

there's no such thing as "anti-pleasure": it's pleasure

that the anchorite takes in his bleak cave

and Thoreau in his bean rows and cabin. For Thoreau,

the Zen is: wanting less is wanting more.

drunkenly sauntered into and out of the atrium,

then back to his room: he wanted the mimosa too,

and there it stood until checkout at noon, a treenapped testimony

to the notion that we will if we can, as evidenced in even

my normally modest, self-effacing friend. If we can,

opulently even in the afterlife: the grave goods

of pharaohs are just as gold as the headrests

and quivers and necklace pendants they used every day

on this side of the divide, the food containers

of Chinese emperors are ready for heavenly meals

that the carved obsidian dragons on the great jade lids

will faithfully guard forever. My own

innate definition of "gratification" is right there

in its modifier "immediate," and once or twice

I've hurt somebody in filling my maw. I've walked

of stars I lusted after as surely as any despot

contemplating his treasury. The slice of American cheese

on the drive-thru-window burger is also gold,

and I go where my hunger dictates.