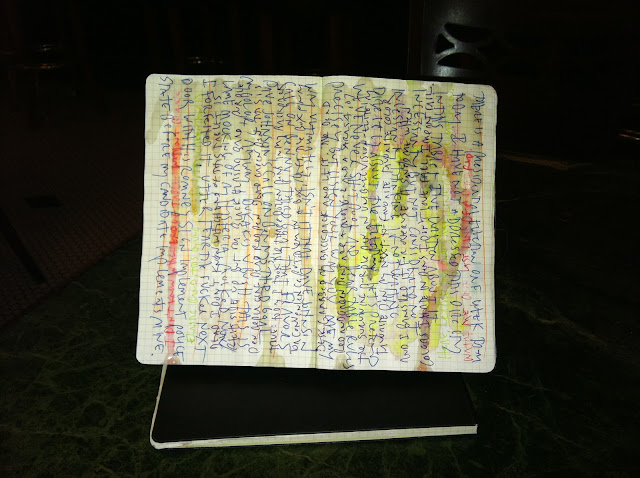 Saturday bleggalgazing - I emailed Me and Mine member Jim (you can be a Me and Mine member too: shake my hand) to get him to confirm his continuing existence. He's been silent not only over at his blog but in comments here and elsewhere. He's fine, he's "running like a fiend" and "writing ferociously" which sounds like a damn fine midlife crisis to me. He says hello to everyone who know him to know his hello. Also, yesterday a very Kind blogfriend bumped this post at three high traffic places, thanks very much, it's quite the coffee-snorter to have looked at stats at 6:30 AM and again at 8:00 and KABOOM!!! Mentioned just to say it was fascinating watching, this bleggal shit fascinates me, I used to say that all the time, I assume it's just assumed via bleggal osmosis by people here since I used to say it all the time (or at least so explicitly). Mentioned also so that if I happened to link to you in past two days and you had a mini-kaboom from me to you it's not because I'm suddenly anybody. Also too, Kurt's show yesterday. Also too, unless something really extraordinary occurs, I'm gonna stop posting political links until --- who the fuck am I kidding. I am, however, acknowledging the correctness of what L said Thursday night: no one is going to change anyone's mind in the next four days. Hey! Did you know Washington DC has a professional soccer team?

Hey! via WFMU station manager Ken, have these links just after you've thrown them the coins in your pocket. Sorry for the color, it's how they c/ped.

Also too, this is the third time in the past eleven months I woke up with this in my head: