Planet is seeing Yo La Tengo tonight in Ann Arbor (she is safely there - for those of you who tune in for Planet news - the car is good), Earthgirl and I and Hamster and Mr Alarum and Xtina see them a week from tonight at 930, I said last night at Thursday Night Pints., adding, !wOOt! Three more from the same session as above here. No, I don't hate KEXP, I said when K said I thought you hated KEXP after I showed her the above video. It's true, I said, they pissed me off over Beefheart and they play fedora-wearers' shit I don't want to hear, but I don't hate KEXP - El Toro's a Mocomofo ex-pat, we no doubt were at

concerts together without knowing it in the early 80s, Zoom is a bud. We touched on the Brennan hearings, the obsolescence of the tug-of-war trope, of us, twelve-year-old golden retrievers with bad hips who whine at the bottom of steps. I said, drones are a soothing red herring, I mean, is there really anyone who doesn't believe Obama kills people all the time by various other means? 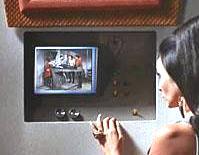 K asked about this shitty blog, I said I've got an idea for a lame-ass Star Trek allusion for my next post, I said I got a very Kind email yesterday morning, thank you very much. I was told I still have the rest of February and 2013 to meet the Proust requirement which would save me hundreds of dollars next year, I paid down the first January 2014 Thursday Night Pint's bill for motherfucking amber NyQuil last night. I mentioned an article on Marianne Moore to L, she's a major fan, the article serendipitously published in yesterday's ::wood s lot:: one day before Elizabeth Bishop's (born 102 years ago today) birthday, Bishop's birthday serendipitous in itself because what I said about X on Exene's birthday is true about Bishop re: the work aging badly to me - I blame me. D, you're missed, feel better. I'm afraid of Americans. This week in war. Fucking Christ, I just saw next week's Villager digital dinner will be SOTU sausage. The Moose. Police state. Idiocies. Pastor Sanctimonious on the holiness of drones. The transparency illusion. Visit to St. Elizabeths. Two ways to be wrong about the internet. Hollywood stars. My current and future hell. Bolano's five tips for short-story writing. Flowers in concrete. Badiou, for those of you who do. Incoming books. Mary Carr, I said when asked by L what I'm reading. Hejinian, Olson, nothing but poetry, I'm incapable of reading prose now. And tablet, asked K. Shit, I said, the fucking blog is tablet. Anthony's links of the week. One Art. Low: see Bishop and X. Feldman's Complete Works for Two Pianos (spotify needed). Apples and oranges. Oranges and Lemons. Stream the new Nick Cave and the Bad Seeds.

SUICIDE OF A MODERATE DICTATOR

This is a day when truths will out, perhaps;
leak from the dangling telephone earphones
sapping the festooned switchboards' strength;
fall from the windows, blow from off the sills,
—the vague, slight unremarkable contents
of emptying ash-trays; rub off on our fingers
like ink from the un-proof-read newspapers,
crocking the way the unfocused photographs
of crooked faces do that soil our coats,
our tropical-weight coats, like slapped-at moths.

Today's a day when those who work
are idling. Those who played must work
and hurry, too, to get it done,
with little dignity or none.
The newspapers are sold; the kiosk shutters
crash down. But anyway, in the night
the headlines wrote themselves, see, on the streets
and sidewalks everywhere; a sediment's splashed
even to the first floors of apartment houses.

This is a day that's beautiful as well,
and warm and clear. At seven o'clock I saw
the dogs being walked along the famous beach
as usual, in a shiny gray-green dawn,
leaving their paw prints draining in the wet.
The line of breakers was steady and the pinkish,
segmented rainbow steadily hung above it.
At eight two little boys were flying kites.