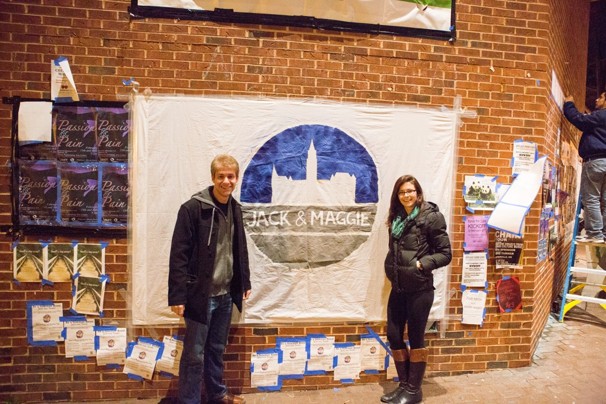 Jack Applebaum and his running mate, Maggie Cleary, pose in Lauinger Library in front of their campaign poster when the two-week campaign period began.

My father’s been dead for thirty years
but when he appears behind my shoulder
offering advice, or condemnation, or a quiet pride
in something I’ve done that isn’t even thistledown
or tiny shavings of balsa wood in the eyes of the world
—“Albie, grip in the middle and turn
with a steady pressure”—it’s measurable,
if not the way the wind is in a sock,
or ohms, or net-and-gross, it registers the way
an absence sometimes does, and I listen to him
with a care I never exhibited when he was a presence,
alive, in his undershirt, chewing his tiny licorice pellets
and radiating a rough-hewn love. “Negative
capability”—the phrase of course is Keats’s,


from his letters, but we make it ours a hundred times
a day. A hundred times we do our own pedestrian
version of early maritime cartography: the known world
stops, and over its edge the fuddled mapmaker writes
Here There Be Monsters and then illustrates
their non-existing coiled lengths and hell-breath
with a color-splotched vivacity he wouldn’t waste
on inhabited shores. Or: “Don’t think
of a polar bear!”...the game one plays
with a child. But I say with adult certainty that
when Eddie’s wife Fiona went back to stripping
he couldn’t stand to be at the club and see, and yet
those empty hours in his mind were populated just
as unbearably—and indeed, yes, there


were monsters in that void, and the vigilant bears
of insecurity and jealousy padded hungrily behind
his eyes each night until her return. For Keats,
however, the force that emptiness makes kinetic is
a positive one, the way that the invisible, unknowable
“dark energy” is seminal, a kind of funding agency
or sugar daddy powering the universe in all
its spangled beauty and veiled mystery
from behind the scenes. Last night, a woozy few of us
were mourning the demise of The Dusty Bookshelf.
“Well I tried to support it,” I said, “by stopping in from time
to time.” And B, the king of local kleptobibliomania, with
his nimble touch and expando-capacious overalls, said
“I tried to support it by not going in.”