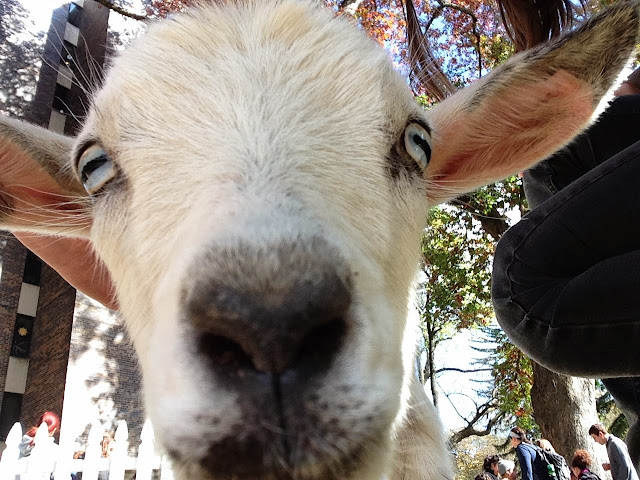 
Fire isn’t allowed, for the sake of the books.
The lean monk-copyist who scribes the books is slate-blue at his fingertips
this steely late-November day in the year 1000. Brother Ambrosio
huffs some perfunctory warmth on his stiffening hands,
then bends again to his goat’s-horn of ink. For every line,
he believes, he’s forgiven a sin. And now he’s at his heavy
uncial letters, and will be for nine hours more,
until a slab of bread and a beet relieve his transcriptual ardor.
What he copies?—psalter, missal, hagiography:
the predetermined and sanctioned community passions
of a religious culture. Nothing like the twentieth century’s
prevalent kneejerk “self-expression.” Nothing like the priest,


excuse me: former priest, and former nun, on daytime talk TV,
who live, she tells us, in a “trinity of love” with the former
creator-of-tourist-ashtrays-out-of-catfish-heads. This is,
she insists, the final and jubilant stage of a lifelong “quest
to feel belongingness” initiated thirty years before
by parents skittering cross-country with the military: they
were wholly rootless, and so she grew up “unable to commit.” The following day,
a man confesses to pedophilia because of a lesbian aunt.
A woman says she robbed the Sack-N-Save of $13.42
“because of what they’re dumping in the water supply, it makes me
go all freaky.” Steve was bounced out from The Chicken Shack
“because I’m Scandinavian.” The culture


of blame is so completely exterior in its search for cause,
some days I wake to think I’ll find most people laboring
under the weight of sci-fi-style mind parasites, like fleshy turbans
spewing in, and feeding off, their brain blood. This (by “this”
I mean of course a recognition of the magic of objective correlative
boppin’ about in the spotlight) is, to some length,
understandable: you can’t beat the miniscule carry-along
convenience of a silicon chip invisibly set in something,
BUT for sheer persuasive visual power, that can’t touch
a 1940s generating plant, its giant Alcatrazian shape
against the sky, and the enormous wrestling electrical crackles
snaking its rooftop pylon. In the scriptorium, even


—such an isolated unit of human endeavor, its limited range
of reactions surely is pure—when Brother Ambrosio
nods off, sleepy in his long day’s long eighth hour
of thickly nibbed and careful letters, he knows
it’s imps in league with Satan that keep pulling down his eyelids.
If in scratching his flea-measled thigh he spills
a hand’s-expanse of ink across the vellum page, the fleas
are tiny devils on a guerilla mission from Hell.
And once a devilkin took lodging in his belly, and there
created “rumbling noises like a toad, and which, for hours,
spoiled the concentration of all of the other Brothers.”
We find parchment scraps with appropriate exorcisms:


“Away! you flaming sow, you poisoned udder,
you arse of the arch-fiend, shit-fly, stinking he-goat,
out out out, away, back into thine infernal kitchen,
you bestial puke!” We also find
those charming marginal doodles (sprigs in flower,
unicorns, seemingly every songbird in Creation): such
diminutive external bodies given to the longings of these
cooped-up men. And when they came to drag my friend Jess
screaming to the ward, because he was beating his head
on the lawyer’s steps, it was clear to us all that the chemicals
in his mind had turned against him. It was clear to Jess
that he was being hunted like prey by hounds from the moon.