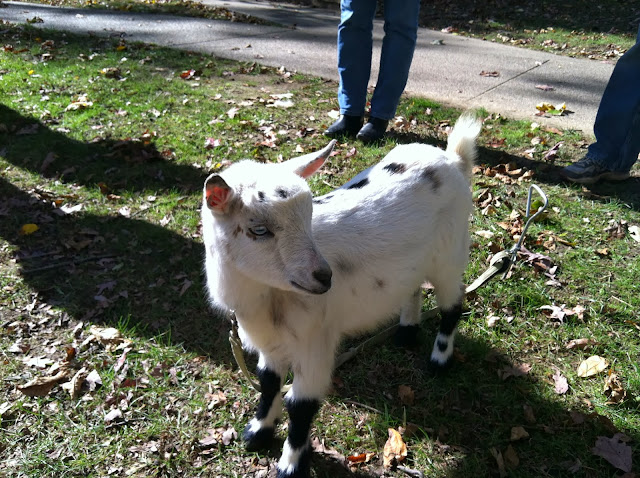 I for one want more Gwendolyn the Goat. She's four months old, she's the size of a terrier. Blue eyes are rare in (whatever breed Gwendolyn is) goat, said her handler, a Columbus Crew fan. He laughed at my DC United sweatshirt. We talked MLS, USMNT, why United sucks, will Olsen keep his job. I didn't tell him of my United apostasies and anger over new ownership and the pricing for next season that plainly indicates LOUD SIDE's eventual banishment to an endzone in a new stadium and my lack of damn and self-extortionist's angst over next season's season tickets: that's just for you, loyal readers. I know two people, goat-wise, a wife and daughter, they'd own goats in our backyard the day after MOCO legalizes goat-ownership in tract-housing neighborhoods. OK.

We rent a car when we visit Planet at college in Ohio. We end up, going back and forth and the drives in between, easily clocking 1200 miles, most times more, and rental rates are as cheap or cheaper than the wear-and-tear on our cars if we used them trip after trip. It's fun to drive something different, to plow up the mountain to Frostburg from the Potomac in Cumberland at 80 MPH on someone else's engine. Rentalcarco gives us two sets of keys on one metal cord. The cord is welded into a rivet that makes both ends undetachable from the other. I always figured we got two sets of keys so they could be separated so if one was lost a trip could continue (while paying replacement price one of my dozen initials on contract surely made me liable for). I'd always wondered why the welding, but because I misplaced the keys for two scary minutes this trip the question stayed in my head. We returned the car Monday evening. I asked the salesperson about the keys, how do you separate the two sets. You don't, he said. I asked, what's the point of giving me two sets of keys if I can't separate them so that if I lose one I lose both. He said, we want them together so that if you drop off a car at a different location than this one they're still together. I said, you all don't allow cars to be dropped off at a different location than the one where the car was picked up, I talked with you (as in the same salesperson) last January when we wanted to rent a car one way (for reasons I reminded him and he acknowledged but whose details aren't important to this post) and you thanked me for my loyalty but fuck me, you said politely, we don't rent one way. Alright, he said, it's because we sell the cars after a set period (depending on make/model (as opposed to remake/remodel I add here, didn't add then, though thought it)) and we get less of a price for only one set of keys, minimal though it be, headquarters is insistent the two sets stay together. A manager walked in, saw me shaking my head in amusement, asked if all was OK. This is Mr Popovich, said the salesperson, he was just returning his keys. Are you related to Gregg? he asked. I said, everyone here asks me that, fine metaphors abound. What? he said. I said, I said I am such a goat. Huh? he said. 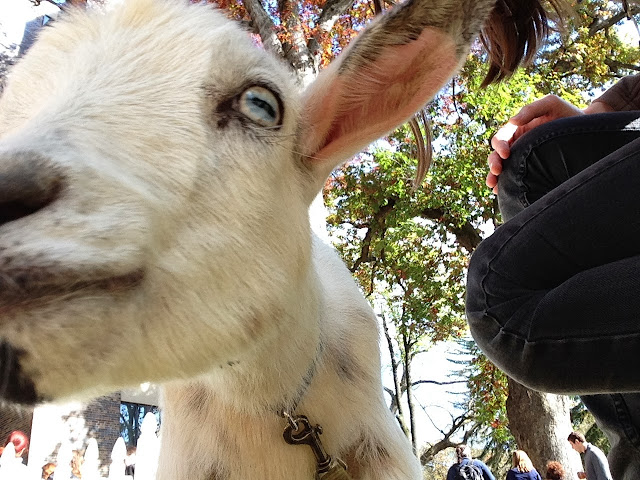 YOU HAVE HARNESSED YOURSELF RIDICULOUSLY TO THIS WORLD


Who rode a spotted pony to the lake away from summer


The woman in the field dressed only in the sun.


Blubbery white bears each clinging to his one last hunk of  ice.


I am obliged, now, to refrain from dying, for as long as it is possible.


For whom left am I first?


Like a marmoset getting out of  her Great Ape suit.