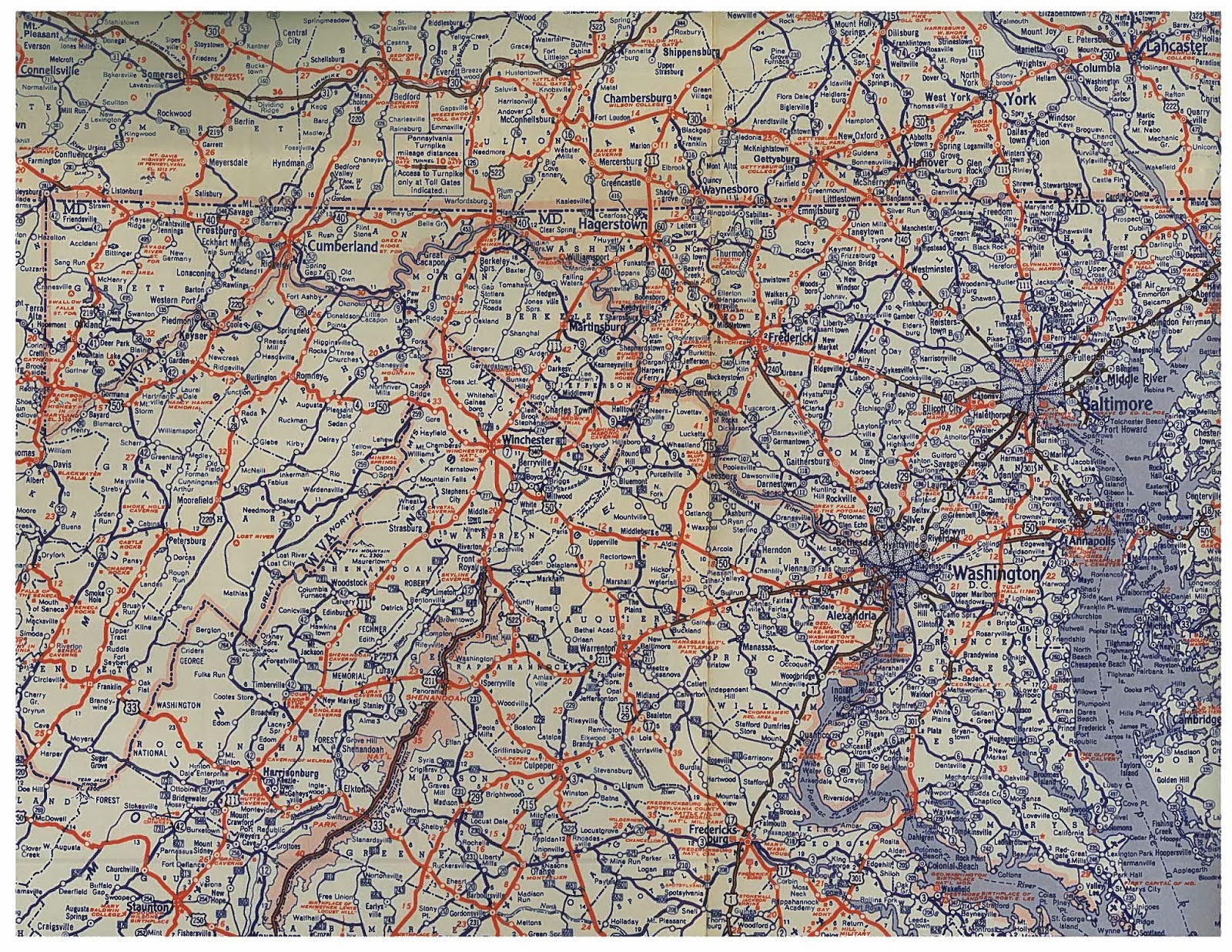 Maps fascinate me, always have, the above one of the many maps SeatSix gave me this past Giftmas, a 1951, pre-interstate Maryland/Virginia/West Virginia/Delaware gas station road map. I did not know the current Maryland 45 north from Baltimore towards York PA was once signed US 111. Also note that what is now US 40 between Frederick and Hagerstown was Alt US 40 in 1951, what is now ALT US 40 then US 40. The Giftmas before the most recent SeatSix gave me a giant map on MOCO circa 1830, it's gorgeous, as soon as I figure out how to get it home I'll get it out of our parents' basement. Anyway, there seem to me a recent spate of articles about mapping, here's another. I gladly admit I look for map-shit, I admit it might be my imagination, this recent spate, but I'm curious as to why (I suspect it's new mapping technology in conjunction with the expanding police state, yo) in all the places I normally look there's more on map-yap than usual.

Do you have adequate oxen for the job?
No, my oxen are inadequate.
Well, how many oxen would it take to do an adequate job?
I would need ten more oxen to do the job adequately.
I'll see if I can get them for you.
I'd be obliged if you could do that for me.
Certainly. And do you have sufficient fishcakes for the men?
We have fifty fishcakes, which is less than sufficient.
I'll have them delivered on the morrow.
Do you need maps of the mountains and the underworld?
We have maps of the mountains but we lack maps of the underworld.
Of course you lack maps of the underworld,
there are no maps of the underworld.
And, besides, you don't want to go there, it's stuffy.
I had no intention of going there, or anywhere for that matter.
It's just that you asked me if I needed maps. . . .
Yes, yes, it's my fault, I got carried away.
What do you need, then, you tell me?
We need seeds, we need plows, we need scythes, chickens,
pigs, cows, buckets and women.
Women?
We have no women.
You're a sorry lot, then.
We are a sorry lot, sir.
Well, I can't get you women.
I assumed as much, sir.
What are you going to do without women, then?
We will suffer, sir. And then we'll die out one by one.
Can any of you sing?
Yes, sir, we have many fine singers among us.
Order them to begin singing immediately.
Either women will find you this way or you will die
comforted. Meanwhile busy yourselves
with the meaningful tasks you have set for yourselves.
Sir, we will not rest until the babes arrive.